A quick trip to the shop turned into a two hour walk, a good proportion of which was spend in the Stowe area of Lichfield. I found the plaque marking the approximate site of the old gate or barr into the city and then I remembered that the Cruck House was nearby. 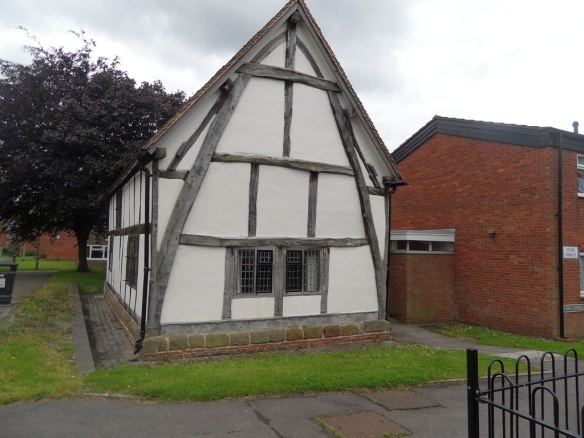 I wanted to get over to Stowe Pool, to see if there were any water lilies this year and crossed over using the bridge,  something I hadn’t ever done in 8 years of living in Lichfield!

View from the bridge 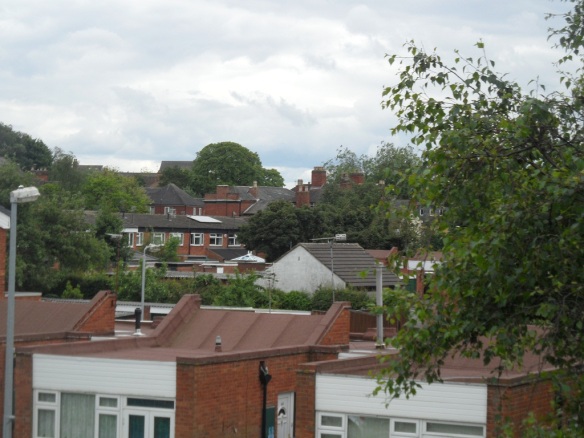 The rooftops of Stowe

There were water lilies in the pool although possibly not as many as there were the same time last year. Whether this is because the sun has gone awol this year, I don’t know. I didn’t spot any nests amongst them either. This might be as they’ve chosen to move onto the specially built wildfowl islands built in the centre of the pool instead! 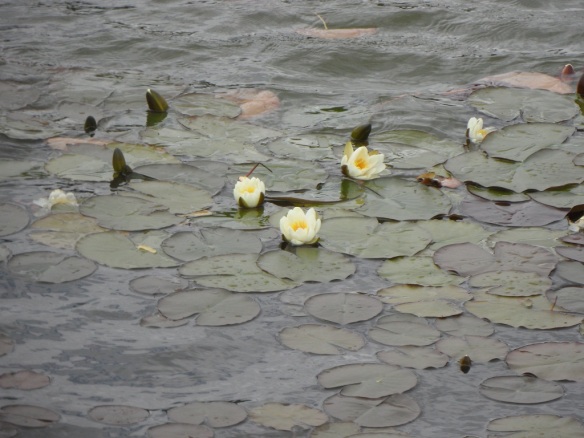 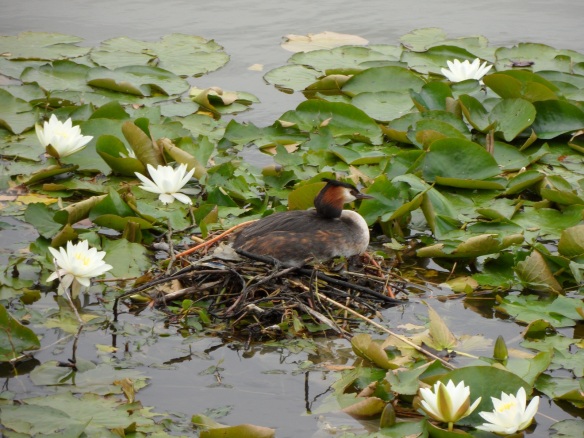 Back to the ward banners in the Guildhall and I think that Stowe’s is the one showing St Chad’s cross, relating to the fact that St Chad’s Church and St Chad’s well are found inside this ward. 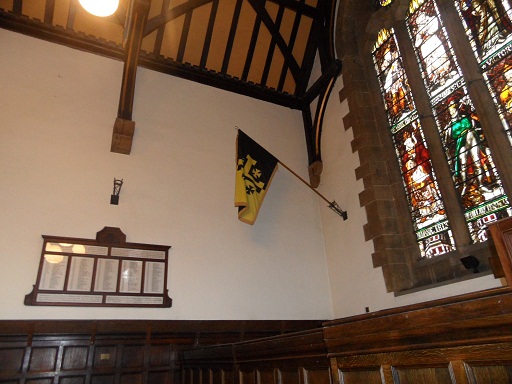 Although the Stowe St gate is long gone,  I do get a sense of being outside the city here. It’s a wonderful place to explore and enjoy. One of the definitions I’ve seen for the placename Stowe is ‘meeting place’, and from my lookout point up on the bridge I saw children playing, people out for a walk and couples sat talking. If you ever get the chance to join them, you should.

Even though it feels as if it’s barely begun, it’s already Midsummer and the lane next to the church is now green and leafy. Lovely as it is, this is probably the least interesting time for the lane. 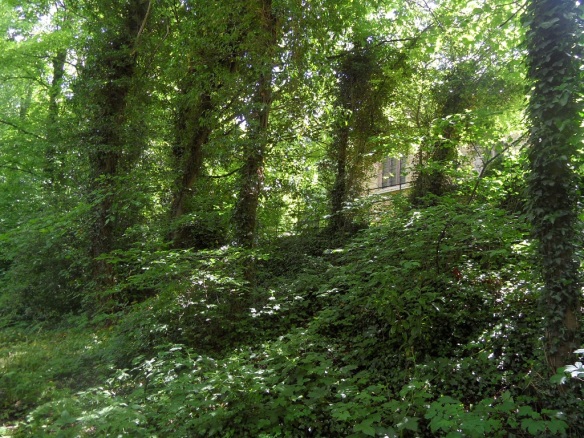 Fallen elderflowers and other petals lie scattered like confetti from nearby Christ Church. 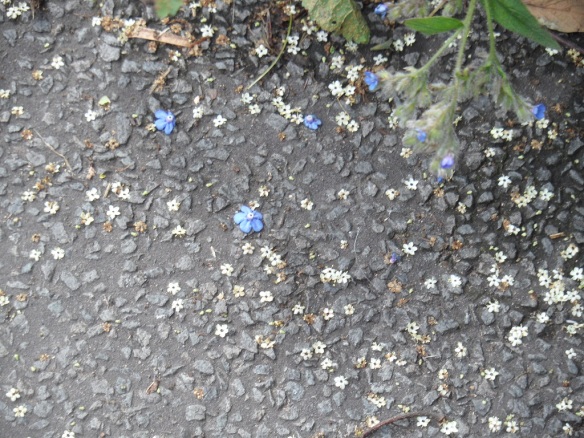 Alongside them are Midsummer reminders of Autumn.

The holes in the tree still hold a fascination for me. I put my hand in and took some more photos of the inside, with irrational thoughts of the Boca della Verita at the back of my mind.

It took a bit of effort to drag myself out into the murky, wet evening. Glad I made the effort though. Before I’d even got to the woods, I had a treat when a heron swooped down onto a roof and remained there for a few moments before flying off in the direction of Waitrose. I’ve spotted a heron a couple of times near the old mill pool over there. On twitter, Brownhills Bob & someone from the Pipe Green Trust thought he may have been heading to a heronry at Aldershawe.

Another few steps and I found myself passing a slightly wonky fairyring of mushrooms. I didn’t get too near. I’ve read what happens to mortals who do…..

Once in the woods, the trees, plants and hedgerows glistened, but with drops of recent rainfall, rather than may dew.

I wanted to measure my tree, to get an idea of how old it was. It soon became apparent that this was no task to undertake alone. The people in the flats overlooking the lane, and this robin that turned up to watch, probably wondered what on earth I was doing.

Happily, I managed to enlist someone’s help and we discovered that the trunk measured about 3.2m which could mean that it is anything from around 210 years old to around 130 years old. According to the Royal Forestry Society, a tree could grow between 1.5cm & 2.5cm per year, depending on things like location, soil quality.  So I’m going to read up on Mitchell’s Rule and then maybe I’ll have another go at estimating the age! 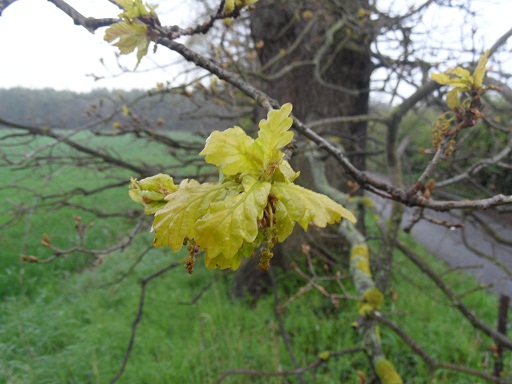 Tree measuring task completed, I headed back down the lane and met a couple out for a walk. They didn’t seem to mind the weather, in fact they thought it was lovely…….

It was time to revisit my tree on the lane next to Christ Church.

Now I think it might be a horse chestnut.

I managed to dodge the heavy showers that had been falling on and off all day, but there was plenty of evidence of them. The air had an earthy smell and looking back towards Christchurch Lane from the A51 end, I noticed the reflection of the trees in the puddles. I’m not sure whether the onion ring crisp spillage adds to or detracts from the scene. 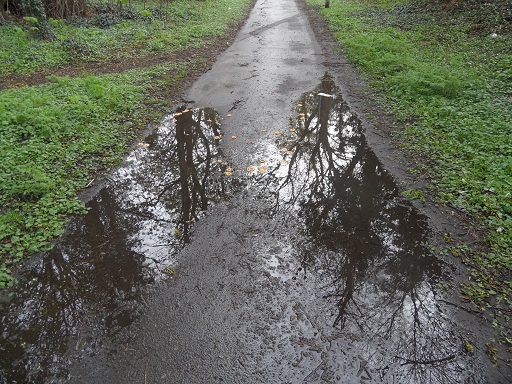 I bet that the crisps were an after school snack, dropped in the haste to get get home before the next shower, but I wonder how these flowers came to be here? From the nearby churchyard perhaps?

It was good to see some new arrivals along the lane.

This reminds me. How are those bluebells in Leomansley Woods coming along?