My visit to Farewell several weeks ago got me interested in finding out more about wells. Brownhills Bob showed me a map of the area around Farewell and it’s amazing to see how many other ‘well’ related placenames there are in that area alone e.g. Stoneywell, Cresswell, Coldwell, Nuns Well and my own personal favourite, Giddywell (wonder what was in the water there?!).

I’ll come back to these another time but for now I thought it would be interesting to find out a bit about what’s probably the most well known well in our area – St Chad’s Well here in Lichfield.

The well has changed a fair bit over the years. The earliest description of the well is said to come from Leland who visited in the 1500s and is quoted in a Lichfield history book published in 1819 as saying “…Stowe church on the east of the towne where is St Chad’s well a spring of pure water where is seen a stone in the bottom of it on which some say St Chad was wont naked to stand in the water and pray at this stone…”.

Below is a picture of the well and church drawn by William Stukeley in 1736. As far as I know, it’s the oldest image of the well that there is. 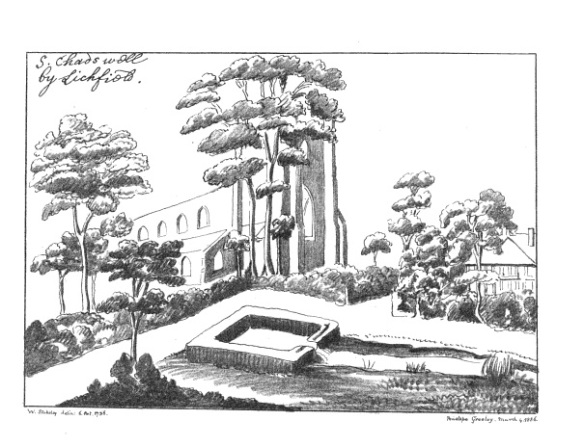 However, James Rawson reported that by 1833 the well had ‘degenerated into a most undignified puddle, more than 6 feet deep’. He seems to dispute Stukeley’s drawing, saying that there was no outlet for escape of water and the brook was not near to the well as depicted above. The well basin had become ‘filled up with mud and filth’ which Rawson believed was due to drainage in the surrounding meadows. As a result an octagonal building was erected over the well, which remained in place until 1947, when I understand that the well was actually moved to its present position and took on its current form. It would be interesting to see if there are any first hand accounts of this?

At some point it seems people may have thought the water in the well was harmful to drink. In a volume of ‘The Antiquary’, published in 1889 a Rev C F R Palmer is quoted as saying “It is popularly believed that it is dangerous to drink of the water of St. Chad’s Well, as it is sure to give a fit of the ” shakes,” Yet, in spite of the attendant’s remonstrances, I took a good draught, and, instead of ague, experienced only great refreshment in a fatiguing walk on a sultry day”. Like Rev Palmer, the lad in the photo looks like he’s about to take a good draught and doesn’t seem too concerned!

In 1806, Thomas Harwood wrote that ” The superstitious custom of adorning this well with boughs and of reading the gospel for the day at this and at other wells and pumps is yet observed in this city on Ascension Day”.  According to St Chad’s church website, the tradition of well dressing (mostly associated with our neighbours over in Derbyshire) was revived in 1995 to commemorate the 50th anniversary of Christian Aid. I think the last well dressing was in 2010 with a girl guide theme. I wonder if the custom will be revived again?

I had always assumed that the well and the spring were one and the same, but it seems that it was separate, or at least it became separate at some point. I don’t feel too bad about my ignorance though, as in 1923, the churchwarden Thomas Moseley said ‘no living person knew where the water came from’. In a book published in 1846, I’ve read that ‘The water of the well is sulphurated and near to it is a pretty iron pump giving water from a second well which is a superfine chalybeate’ and in an archaeological survey from 2006, it refers to a little brick building containing the spring. The survey was carried out as there was a proposal to build a visitors centre in the well’s vicinity. I understand that plans for the centre were abandoned in February 2008 but the survey makes for an interesting read and you can find it here.

Though plans for a visitors centre didn’t come to fruition, there is another project that will bring people to the well. On 1st April,  at 2.30pm the Bishop of Lichfield will be opening the first interpretation panel on the Two Saints Way, a pilgrimage route linking Lichfield Cathedral and St Chad’s Well with the shrine of St Werburgh at Chester Cathedral. I hope this is a success and I wish David Potts and all those involved……well!

Some account of Croyland Abbey, read by JM Gresley by William Stukeley

A Short Account of ther City and Close of Lichfield by Thomas George Lomax, John Chappel Woodhouse and William Newling

10 thoughts on “Well Being”