One of the best known landmarks on Cannock Chase is the the 318ft high telecommunications tower at Pye Green, one of 14 built across the country as part of the Cold War ‘Backbone’ network. However, recent discussions based on my previous post revealed that another lesser known landscape feature lay somewhere nearby.

Like its more famous but less whimsical neighbour the Glacial Boulder, the Wishing Stone appears to be an erratic.  However, unlike its more famous neighbour, nobody has thought to put it on a plinth or named a car park after it making it a lot harder to find. The only clues I had to its location was an old postcard someone posted for me on Facebook, a description on Staffordshire Past Track, describing it as being sited on, ‘an old packhorse route known as Blake Street Road and near the possibly medieval St. Chad’s Ditch’ and a reference in the modern classic that is the ‘Adopted Development Brief for Land to the West of Pye Green Road, Hednesford’. 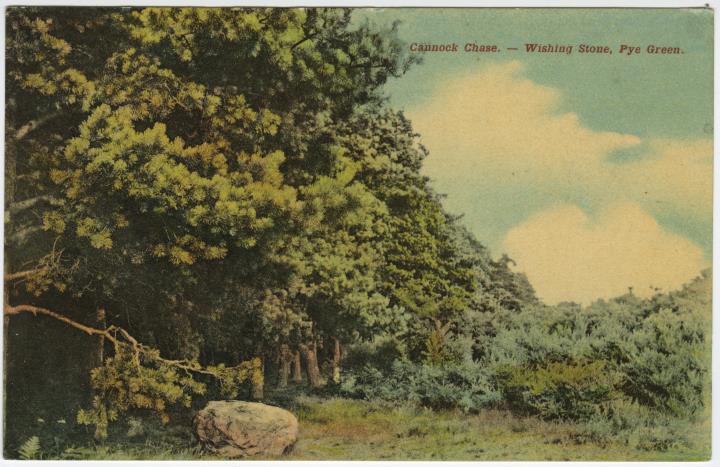 Ok, I’m going to cut to the chase. I went to have a look and didn’t find it. I know it’s still there however, as I’ve just seen a photo of someone stood on it on Facebook. Let me tell you though, this is probably the worst time of year for doing a search in a Facebook group for the word ‘Wishing’. A Happy New Year to all you good folks too.

Once I get out of my Christmas onesie I will go for another look. What I have found in the meantime though is an intriguing reference to the grave of a local highway man called John Deacon. The local legend is expanded upon in the Cannock Chase Guide from 1957, which Brownhills Bob very kindly scanned and uploaded to his blog with a little help from his friends a couple of years ago. It says that Blake Street was frequented by a notorious highwayman known as John th’ Deacon who evaded capture for many years by dressing as a cleric, hence the name. The story paints him as a do-gooding baddie – he may have robbed from the rich but he looked after the poor and needy of the countryside. Bless him. Eventually, th’ Deacon met his maker when he met with a coach-load of Bow Street Runners and he was buried on the spot where he was killed. That spot was somewhere near to the Wishing Stone which frankly, I feel he could have made better use of in this situation. Perhaps he couldn’t find it either.

Understandably, there is lots of scepticism around the tale, with suggestions that the place name of Deacon’s (or Deakin’s as it has sometimes been recorded) Grave is actually a corruption of the word ‘grove’. Whilst it’s tempting to write the story off as nothing more then a folk etymology, I have good reason to think there is more to it than that. An 1817 Ordnance Survey plan of the Penkridge area shows that there was a place called ‘Deadmans Grave’ in the vicinity and in May 1951, the Lichfield Mercury published the recollections of a Brocton resident called Mrs Holmes who had spent her life living on the Chase. One thing she remembered was a mound of earth, which local people referred to as ‘Dead Man’s Grave’.

In Mrs Holme’s version of the legend, the deadman in question was not our Blake Street bandit Deacon, but one or more Mercian monarchs who hunted on the Chase. On the day an excavator came to clear the mound away in preparation for the construction of sewage beds for the military camp, some of the locals skived off work to watch. Although nothing of interest was discovered on that occasion, a much more fruitful exploration of the mound was described by two chaps called Cherry at the start of the 20th century. In their book, they described how ‘the opening of this ‘bury’ afforded a remarkable instance of the confirmation of oral tradition by modern research. Such tradition had from time immemorial described the Milford bury as the as the grave of three Kings slain in a great battle fought on the spot. At the base of the mound were found three separate and distinct layers of human bones, all showing the action of fire and surrounded by a few coarse fragments of ancient British pottery. As confirmatory of the tradition, it is of course noteworthy that no other remains were found and that apparently no previous disturbance of the tumulus had taken place’. Getting into their poetic stride, Cherry & Cherry suggest that the three warriors had found ‘the sleep that lies among the lonely hills’, lying undisturbed as the centuries rolled by whilst an old wives tale kept their memory green’. Indeed it did. Thank you Mrs Holmes.

I would probably bet my money and my life that a highwayman dressed as a man of the cloth did not come riding-riding-riding up and down Blake Street but I’m also confused that the area marked as ‘Deadman’s Grave’ on the 1817 map appears to be a good five miles away from Milford and the mound which was known by this name.  I’ve heard so much about Saxon warriors recently, I’m starting to feel like I’m living in a Bernard Cornwell novel. Were three of them really killed and buried on the Chase or is this just pye in the sky? I wish I knew….