Yesterday, the second of March, was the feast day of St Chad. In 669, Chad founded a monastery near to the site where the church named after him now stands, making Lichfield the new centre of the Diocese of Mercia (it had previously been Repton). Anyone interested in learning more about the life of Chad should read Patrick Comerford’s post here.

Around this time last year,  I wrote about the history of the well at St Chad’s and a little about the pilgrimage route between Lichfield and Chester. This year once again I found myself possibly following in the footstep of pilgrims, when I took a walk down Bird St. 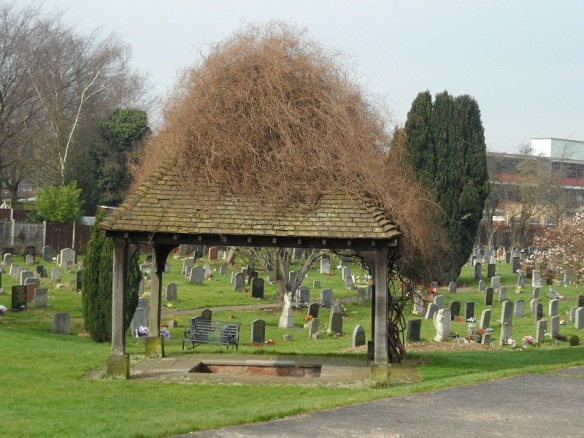 The view from St Chad’s. A question – why was the Saxon church built to house St Chad’s bones and later to become the Cathedral, built over there, and not at the site of Chad’s Monastery and Well?

An alley (or gully or ginnel depending on where you’re from) runs from Bird St, past the George Hotel and then takes a sharp turn towards Minster Pool. In the early fourteenth century it was called Wroo Lane, a name thought to be derived from the Middle English word ‘Wro’ meaning corner. Shortly afterwards, the lane became known as Cock Alley.  According to Thomas Harwood, this ‘new’ name came from a carpenter named Slorcock who once lived there. I’ve done my best to show the route I think the lane took but please also take a look at  it on John Snape’s wonderful 1781 map of Lichfield, which Brownhills Bob very generously shared here on his blog. Although these days it’s probably mostly used as a shortcut to the car park, the Collections for a History of Staffordshire (Volume Six) suggests that this was once an important thoroughfare, leading pilgrims to the ferry which would carry them across the water to the Cathedral. 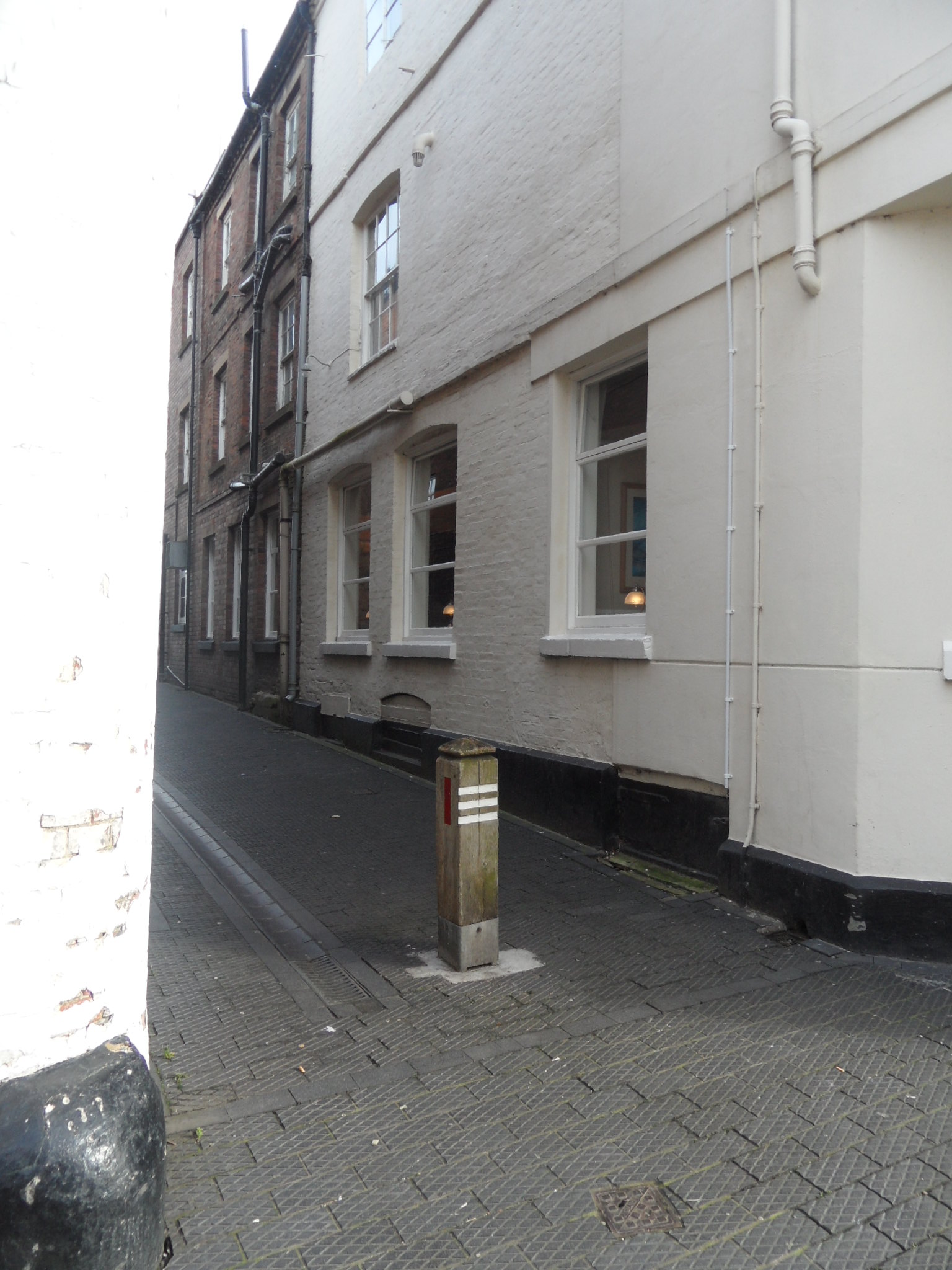 Looking back up towards Wroo Lane. Or possibly Cock Alley.

How did the pilgrims get over those big railings?

At present, I am unsure whether the existence of a ferry for pilgrim traffic is a theory or whether it has actually been confirmed by evidence. I shall keep looking for this and in the meantime, may I suggest that when walking around Lichfield you keep looking too. Remember, it’s not just buildings that have a history, but also the spaces between them.

The History and Antiquities of the Church and City of Lichfield, Thomas Harwood

After visiting the Christian Fields Local Nature Reserve, it seemed a good time to revisit the story that gave a name to the immediate area, and according to some, to the wider city as well.

Legend has it that in around 300AD, one thousand (or 999 depending on which version you read) Christians were massacred by a Roman army and their bodies left unburied in a place that would become known as the ‘Field of Corpses’ aka Lichfield (from the OE lic – body/corpse).   From 1548, versions of this story were depicted on the city seal, examples of which can still be seen in several places across the city, including the Martyrs Plaque at Beacon Park, 19thc police badges on display in the City Gaol, and in the main hall at the Guildhall.

Version of the City Seal from 1688, Main Hall, Guildhall

Several fairly obvious locations in the city have been mooted as possibilities for the specific location of the massacre, including Borrowcop Hill, St Michael’s Churchyard and the site of the Cathedral. However, what was it about this parcel of land, a mile north of the Cathedral that convinced people to such an extent, that it was given the name ‘Christian Fields’?

The image below is an aerial view of the area from 1971. Christian Fields is south of Eastern Avenue, between Dimbles Lane and Curborough Rd.  (Shortly afterwards, a new housing estate was built on the field. Perhaps as a nod to the site’s legendary history, the streets were named after saints. Funnily enough, one of these new houses was my husband’s childhood home – I must ask my in-laws if they ever found anything of interest in the garden!)

An aerial view of Christian Fields, 1971. Reproduced with thanks to Gareth Thomas, Lichfield District Council

In the 17th-century the antiquarian Robert Plot declared that the area, now known as Christian Fields, had been the site of the martyrdom and it has born the name ever since. Needless to say Robert Plot’s claim has never been substantiated and no archaeological evidence has ever been presented in its support.

Looking at John Speed’s 1610 map of the city, I wonder whether the idea that the massacre took place at Christian Fields actually pre-dates Robert Plot? At the end of a road leading north from the Cathedral (possibly Dimbles Lane?), in the vicinity of Christian Fields, is an illustration depicting a scene that looks like a representation of the legend, similar to that found on the city seal.

In the early 1800s, local historians wrote about a series of discoveries near to the site, that persuaded them that the legend was true. The pastscape record has the following description, taken from a history book of the time,

In a meadow adjoining CHRISTIAN FIELDS, known by the name of the TOAD’S HOLE PIECE, have been recently found a considerable quantity of human bones, various pieces  of earthenware, some of which are Roman, a stone bowl or dish perhaps used for grinding corn, a stone ball, fragments of weapons including the head of a pike or halberd and several horseshoes  pierced for nails at the top as well as the sides. The objects  were discovered nearly four feet below the surface in a peaty soil, amongst and covered by great quantities of roots and decaying branches.

I found the book (1) on googlebooks and found it contained illustrations of the objects. A letter to the Gentleman’s Magazine in November 1817 gave a little more information,

The articles of which I have sent you drawings were found near some land known by the singular names of Hic Filius and Christian’s field so called, according to tradition, from having been the place where the early converts to Christianity had used to assemble  and where the massacre from which Lichfield derives its name took place.

The letter goes on to describe what I think are these drawings from the Staffordshire Past Track site. – “a stone dish one foot diameter used perhaps for grinding was placed in the earth as a cover for a smooth red earthenware broken by the eagerness of the workmen to examine the contents (proved earth only). The black spots arc metallic. Also, the head of a weapon in preservation the wooden staff was broken off near the head, the iron is 21 inches in length.  There are also weapons found in 1817 in the foundation of one of the canons houses on the North side of the Close with some bones and broken armour”.

I’m not suggesting that the objects are proof of the legend, which along with the ‘Field of the Dead’ explanation of the place name of Lichfield is generally accepted to be untrue (the current favoured explanation of the name is ‘the common pasture in or beside the the grey wood).  However, and I may be reading into things too much here, I do think it’s a little curious that these items seem to almost be a tick list of props for the martyrs’ story…. Bones? Check. Horses & weapons? Check. A link to the Romans? Check.  The question I’m finding it hard to find an answer to is, if it’s agreed that these objects aren’t part of the story of the Christian Martyrs, in some way, shape or form, then whose story or stories are they part of?

A further reference from the same book says the following,

About three quarters of a mile from (St Chad’s Well) are Hic filiius and Christians Fields where the converts of Ampbibalus are said to have been massacred; a considerable quantity of human bones have been found in the adjoining fields a few feet beneath the surface.

It has been the custom of civilized nations to collect and burn or bury the bodies of those slain in battle here fragments of bones are found scattered through a space exceeding half a mile and in one place only have they been met with under the appearance of having been buried which was in a field near Pones mill on the east side of the brook these had probably been dug up and thrown into an excavation as were several cart loads found in the field adjoining to that in which the earthen ware before noticed was discovered which were thrown into a marl pit near the spot. Tradition says the bodies of the massacred christians were left unburied a prey to the birds and beasts of the forest.

On maps from the later 1800s, there is a marl pit in the corner of the field marked as ‘Christian Fields’.

(1) A Short Account of the City and Close of Lichfield by Lomax, Woodhouse & Newling (1819)