Inspired by Brownhills Bob’s love of the place and the inclusion of Holy Angels in Simon Jenkins’ list of England’s Thousand Best Churches, I finally visited Hoar Cross last weekend.

As Nikolaus Pevsner says in his book on Staffordshire buildings,‘The story of Hoar Cross is well known enough’, but it bears repeating here. Work on the red brick, Jacobean style hall, now used as a spa resort, began in 1862, shortly before Hugo Meynell Ingram married Emily Charlotte Wood. The hall was completed in 1871, but in that same year Hugo was killed in a hunting accident. The widowed Emily employed George Frederick Bodley and his partner Thomas Garner to build a church in his memory, in the grounds of the home they had shared. Emily died in 1904, her remains interred near to those of her husband, whose body had been brought here from the parish church at Yoxall, after the dedication of Holy Angels in 1876. It’s said that Emily was never completely satisfied with her creation, but from what I’ve read it’s considered a masterpiece by all those who know their stuff architecturally. For what it’s worth, I think it’s beautiful too.

If anyone wants to give me a lesson in how to take photos of windows & getting the light right I will be eternally grateful.

You wouldn’t be able to tell, because the photo is so bad, but this tablet acknowledges the contribution of Lichfield sculptor and stone mason Robert Bridgeman and is decorated with a mallet, chisel and other tools.

However, as well as this story of love, loss and incredible architecture, I’m also interested in the earlier chapters in Hoar Cross’s history.  According to Horovitz’s Staffordshire place name study, the name of the village was first recorded in 1230 as ‘Horcros’ and is thought to refer to a grey cross or boundary cross. Whether this was a marker for the point where the four wards of Needwood Forest once met, or whether it indicated the extent of land owned by Burton Abbey in these parts, or whether something else entirely is a matter for ongoing speculation. Whatever its purpose, the cross that gave the place its name is long gone and now it is only the name that remains. 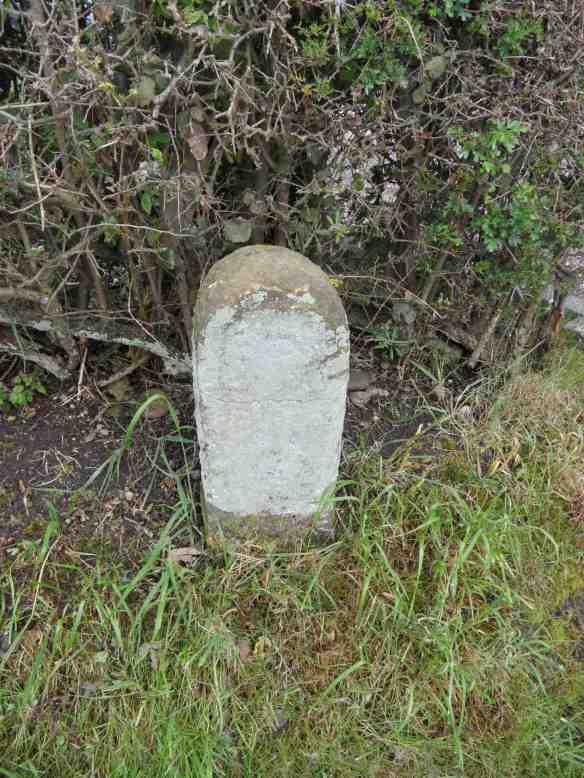 There is another boundary marker on one of the grass verges in the village. It appears on a 1923 Ordnance Survey map as a ‘boundary stone’ and seems to mark a parish boundary – Hoar Cross sits between Yoxall and Newborough.

I’d also like to know more about the original Hoar Cross Hall – the medieval moated house, known as the ‘Manor of the Cross’. According to Stebbing Shaw’s History of Staffordshire, the hall was destroyed in the 1700s and a farmhouse built on the site. According to the English Heritage Pastscape record, there is little in the form of maps or archaeology to back up this anecedotal evidence but the fact that there is an 18thc farmhouse known as Hoar Cross Old Hall suggests that Shaw was probably correct.

Despite not setting foot in the spa (not really my cup of herbal tea), my trip to Hoar Cross left my mind and spirit feeling indulged. Before leaving, I stopped off to indulge my body too, with a drink at the Meynell Ingrams Arms. Dating back to the seventeenth century, this former farm house became a coaching inn known as the Shoulder of Mutton. The name was changed in the 1860s, around the time of Emily and Hugo’s wedding, and the rebuilding of the Hall. Sadly, there was no sign of Basil, the horse who attracted media attention several years ago for actually walking into the bar and enjoying a pint of pedigree, but after a couple of hours at Hoar Cross, I had anything but a long face as I headed back to Lichfield. 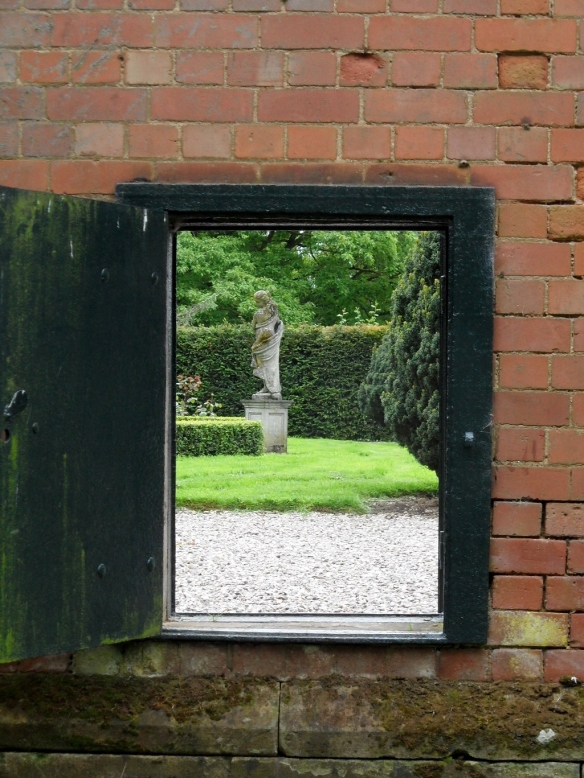 Midlandspubs.co.uk
‘A Survey and Analysis of the Place-Names of Staffordshire’ by David Horovitz, LL. B https://lichfieldlore.files.wordpress.com/2014/05/397633_vol2.pdf
Lichfield Mercury Archive
http://www.patrickcomerford.com/2014/04/art-for-lent-36-two-portraits-of-emily.html
Staffordshire (A Shell Guide) by Henry Thorold
The Buildings of England – Staffordshire by Nikolaus Pevsner

Back in October, during the Lichfield Discovered group walk around Leomansley, a friend of mine, Kerry, happened to mention that she’d discovered a large stone, buried at the bottom of her Leomansley garden. Not just any old stone either – it has a perfect ‘L’ carved into it which clearly has some significance. The question is what?

My initial thought was that it was a boundary stone of some kind. As far as I can see, the area where the stone was discovered was undeveloped until the mid 20th century and was previously agricultural land known as Parnell’s field. I know that there was also common land in Leomansley, stretching south and east from Leamonsley Mill Pond to the Walsall Road  as well as a Lammas meadow, and so my best guess is that this could be a dole stone or similar, used to mark out strips of land or perhaps to mark the common land from land owned by others?

There’s a reference from May 1659, transcribed by Thomas Harwood in 1806 from a ‘Boke made in the 16 yere of the regne of kynge Edward the Fourthe. Thomas Dodde being Mastur of the Gilde of our Ladye Saynt Marie and of Seynt John the Baptiste in Lichfelde of all the lands and tenements lungyng to the forsaide Glide and the fyldes abowte Lychefeld and yn the towne” (1) including the following:

To be honest, I can’t visualise how the jigsaw of land fitted together and so I think a trip to the record office, first stop the St Michael’s Tithe Map, is in order. (2)

In the meantime, Kerry and I would love to hear from anyone who may have any ideas on what the stone is, what it was for and of course, what the L might stand for. Leomansley? Lammas?  Also, as greedy as ever, I’m wondering if more stones might be out there somewhere. Time to do some gardening I think….

Big thanks to Kerry for sharing her discovery and for letting me share her photograph.

1) The spellings are as they are found in Harwood’s book. I like how even the spelling of Lichfield is inconsistent!

2) Something else Leomansely agriculture related. I had wondered why Saxon Walk, a cul-de-sac off the lane leading off Christchurch Lane, past Leomansley Woods, towards Pipe Green was so called. According to John Shaw, the name was taken from the name of the field which it was built on – Saxon’s Nook. Might be a good opportunity to take a look at some of the other old field names whilst I’ve got the Tithe Map out. Place names carry meanings.

3) I suppose I should consider the possibility that the stone actually came from elsewhere and ended up here through use as a garden feature or something.

The History and Antiquities of the Church and City of Lichfield, Thomas Harwood

A History of the County of Stafford: Volume 14: Lichfield