Tomorrow’s walk will be different to today’s walk….I have walked past Christ Church three times in as many weeks. Each time was different. The first was a bleak midwinter day, the biting cold numbing my fingers as I photographed the stone heads around the church. By the second, the scene had changed and even the heads were capped in snow. 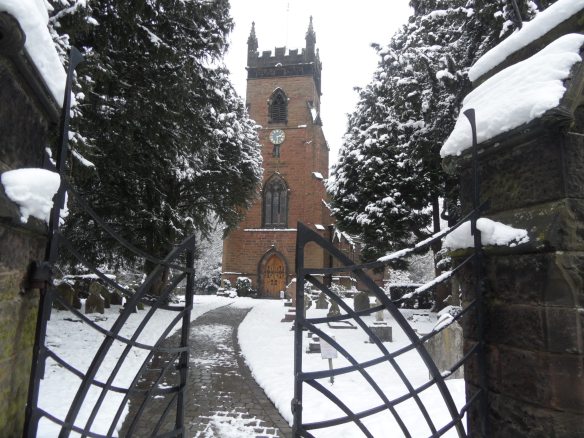 Whether somehow related to the snow or whether the weather was incidental, numbers on the reverse of head stones that I had previously passed were suddenly evident where I had never noticed them before. Interesting that only two of the several stones I could see from the road had numbers on them, so I’m guessing that they were some sort of reference mark made by the stone mason? Naturally, we look to the inscriptions on the front of headstones for information, but can the back sometimes tell us something as well? 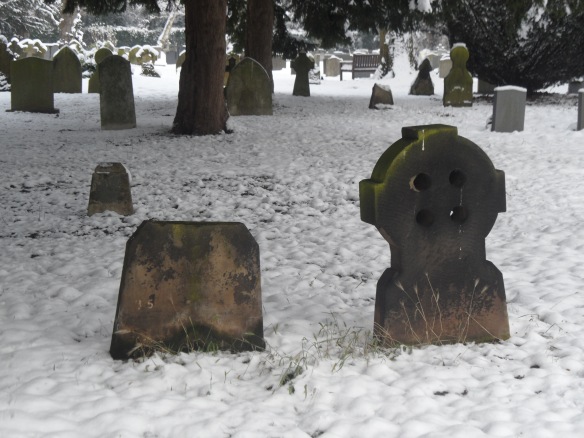 On my third visit yesterday, the snow has been replaced by snowdrops and crocuses, the first flowers of the year and a welcome reminder after last week’s mini ice age that spring is on its way (I know we’re not out of the winter woods yet, but I’m optimistic!).

Another weather and season influenced walk was up Abnalls Lane on a wet and windy day.  Tipping my head back to gather my hair in a pony tail to stop it blowing in my eyes caused me to look up and notice fungi growing half way up a tree up high on a bank that may have been missed on a calm and sunny wander. On the same walk the bareness of winter revealed some sort of post in a hedge (I have no idea what this is – some sort of utilities marker?)

The light was poor and Abnalls Lane was more of a stream in places. With the amount of cars passing, it was only a matter of time before I ended up soaked or worse….so I changed my route. Later, outside the derelict Sandyway Farm, a pub known as the Royal Oak for the first half of the nineteenth century, one of the bricks had worked its way free of the decaying shell and lay under brambles alongside the Walsall Rd. I understand that the stamp ‘NCB Hamstead’ means it came from brickworks at the Hamstead Colliery in Birmingham, when it was part of the National Coal Board.

Is the C the wrong way around or is it me?

Admittedly, all of the above are small things but whether small things help you to build a bigger picture of the place you live in or even if they just make you smile, I think they’re worth noticing.