On my recent explorations of the North, I exchanged SatNav Woman for my Mum and a map. It’s a swings and drive several times around the roundabout looking for the right exit approach. SatNav Woman doesn’t get excited by finding places like ‘Gallows Green’ on the map or stopping to ask directions from bonny locals who call you ‘Me Duck’ (ok, that was both of us), but then she doesn’t send you text messages from the car when you’re having a moment with a thousand year old font or leave her wet socks to dry on the dashboard either. 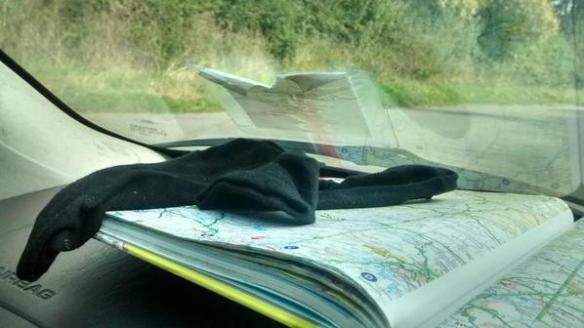 From Croxden Abbey we headed to Mayfield, and specifically, Church Mayfield as I wanted to see the early sixteenth century tower at St John the Baptist. Completed by Thomas Rollestone in 1515, he added the inscription ‘Ainsi et mieux peut etre’. I don’t speak French but I understand this translates to something like ‘thus it is and better it could be’ and appears to be a variation on the Rollestone family motto. Some have interpreted this as an indication that Thomas thought he could have done a bit of a better job on the tower. My maths is as bad as my French, but I can just about work out that this year was its 500th anniversary and at the celebrations in April, someone made an edible replica of the church in gingerbread, something so brilliant that surely neither perfectionist Thomas Rollestone nor Mary Berry could find fault.

The door to the tower is peppered with holes and the story goes that on 7th December 1745 the retreating army of Bonnie Prince Charlie passed through Mayfield, murdering an innkeeper and a man who refused to hand over his horse before turning their muskets on the church door, behind which the terrified villagers had barricaded themselves. Although I came in peace, the door was also locked to me and so I had to be content exploring the churchyard.

Holes in the door

Underneath a yew tree there’s a medieval wayside cross moved here in the mid nineteenth century from Middle Mayfield, where it stood at a junction opposite a house known as ‘The Hermitage’ (an inscription on the door lintel reads ‘William Bott, in his old age, built himself a hermitage 1749).  Something else in the churchyard which I’ve never seen before but is so simple and effective that I’m not sure why, is a tree stump timeline, marking events in the church, village and the world during the lifetime of the Lebanese cedar which was one hundred and seventy seven years old when it was felled in 2008.

En-route to our next destination (Cheadle),  we tried and failed to find the Hanging Bridge, spanning the River Dove, and also the Staffordshire/Derbyshire boundary. It was rebuilt in 1937 but, as you’ll see from the photo I’ve pinched from elsewhere, the arches of the original fourteenth century packhorse bridge are still visible. The name is said to refer to the executions of the Jacobite rebels which took place here following the trouble at Mayfield. However, as much as I’m a fan of folklore, I’m also a lover of linguistics and my suspicion the story was derived from the bridge’s name, and not vice versa, was confirmed by David Horovitz’s epic research into the place names of Staffordshire which reveals that the structure was first recorded as Le Hongindebrugge in 1296, nearly 450 years before Bonnie Prince Charlie’s troops are said to have met their end here. Of course that only raises more questions about what ‘hanging’ actually refers to here. I’ve been thinking about it for over an hour and now I’m handing it over to you, as the best I can come up with is a rope bridge. Ainsi et mieux peut etre….

Just a very quick update on the old church tower at Shenstone. I haven’t had chance to get over there since writing the previous posts on the subject and so this morning, I was really grateful to receive a couple of photographs, taken just today, which show the carved stone on the tower really clearly.

In the churchyard, at the top of the hill, there is an old tower…

…and in the old tower, there is a door… 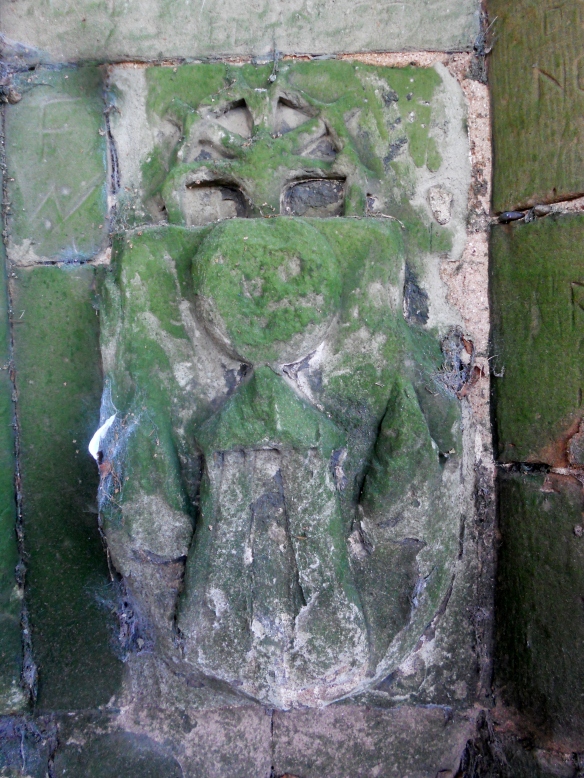 …and next to the door is this carved stone.

Although centuries of exposure to the elements has worn away much of the detail, including the lamb (which Mr Foulkes may have been referring to when he reported seeing a stone with a carving of a lamb near to the north door in the late 1890s), it can be identified as the arms of the Merchant Taylors, one of the twelve great Livery Companies of London. It shows a tent (which apparently the Taylors would once have made for jousting tournaments) with an ermine robe either side (another nod to their trade) beneath a lamb within a sun. The lamb represents John the Baptist, the saint whose name was given to both the old church and the more recent church here.  It looks like there is some graffiti carved into the old sandstone blocks of the tower too, which may also be of interest. 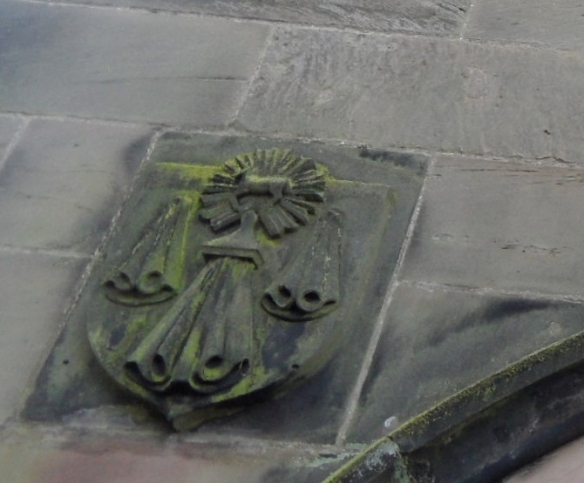 St Michael’s Church at Lichfield also has a version of the arms on the porch.

There was a story that after the old church was abandoned as it was deemed unsafe, ‘it was found to be so remarkably sound that blasting operations were required to demolish the masonry’. Eventually they succeeded and materials from the old church were sold in 1853/54 for £111 2s 8d.

I am not sure what the connection between the Worshipful Company of Merchant Taylors of the City of London, and parish churches at Shenstone and Lichfield could have been, but I’ll keep looking and if anyone has any ideas or suggestion in the meantime, please share them!