Years ago, when I first moved to Lichfield, I went on the ghost tour around the city. One of the stories we were told was that of a Catholic family who died in a fire at their home on Breadmarket St. There was apparently an issue regarding burial because of their religion and, unsurprisingly given the nature of the tour, it was said by some that their presence was still felt at the building in some way.  Recently, this story came up again when I was chatting to a colleague. A book about ghosts happened to be nearby and caused our conversation to turn to the supernatural. The colleague in question mentioned the story, wondering if there was any truth in it. 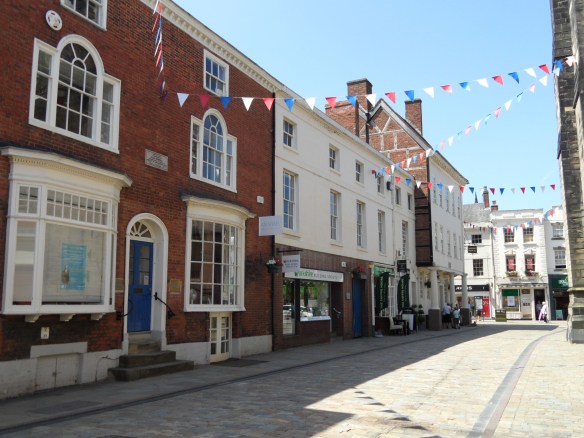 I searched the newspaper archive, and found that the story was essentially true.  I’m not going to transcribe it, as I personally think it’s too graphic and upsetting. However,the facts are that in January 1873 there was a fire at the Breadmarket Street premises of a Lichfield clock and watch maker. Three generations of a family lost their lives and their bodies were laid out on the pavement before being taken to the Guildhall where a Catholic Priest read the burial rites. The family were then taken directly to the graveyard at St Michaels where the Rev J Sejeantson carried out a burial service – they were not taken inside the church. There are reports that no rescue effort had been made, as initially it was thought that the family has already escaped.  The Mercury reports that everyone was at a loss what to do. According to the County History, it was this tragedy that led to the council taking over the responsibility for fire fighting in the city, buying an engine and establishing a brigade, with a building in Sandford Street being used as a fire station.

I am interested in the question as to whether there is any value in ghost stories beyond the obvious ‘entertainment factor’. The mention of ghosts and haunted places can cause the rolling of eyes and mutterings of, ‘There’s no such thing’. Perhaps there’s not, but does that mean that these stories have no interest for us?  If we look beyond the shadowy figures and disembodied footsteps in such tales, can we find something real? Does telling these stories in this way ensure that otherwise forgotten people and events are remembered or is it just an excuse to be ghoulish?

13 thoughts on “A Lichfield Tragedy”