In 1961, the 21st Earl of Shrewsbury sold Ingestre Hall to what was then the West Bromwich Corporation. Along with the red-brick Jacobean style mansion came sixty-six paintings, most of them portraits of the Earl’s ancestors – the Chetwynd, Talbot and Shrewsbury family.The collection was catalogued in 2013 by the Ingestre Festival Association to celebrate the 400th anniversary of the building of the hall and is available to view on the BBC website here, as part of their ‘Your Paintings’ project.

Amongst them are George Talbot, Keeper of Mary Queen of Scots for fifteen years and his wife Bess of Hardwick, arguably the second most powerful woman in Elizabethan England. The 19th Earl of Shrewsbury, Charles John Chetwynd-Talbot, appears twice – aged four and wearing a red dress and aged around twenty five and wearing full dress uniform. The infamous Anna Maria is here too, as a young woman of seventeen, in the year that she wed Francis Talbot and became Countess of Shrewsbury. The marriage would end with the Earl’s death, fatally wounded by his wife’s lover, George Villiers, 2nd Duke of Buckingham, in a duel that took place on 16th March 1667. The event was recorded by Samuel Pepys who described Anna Maria as, ‘my Lady Shrewsbury, who is a whore, and is at this time, and hath for a great while been, a whore to the Duke of Buckingham’.There were reports elsewhere that she had attended the duel disguised as the Duke’s page but whether these rumours (or the ones about what happened in that bloodstained shirt afterwards) are true, we’ll never know.  Also at Ingestre is a portrait of the Shrewsbury’s younger son, John Talbot, who in a twist of fate was also killed in a duel, sometime around his 21st birthday in February 1686.  This cause this time was not infidelity but, ‘having given the Duke of Grafton very unhandsome and provoking language’. 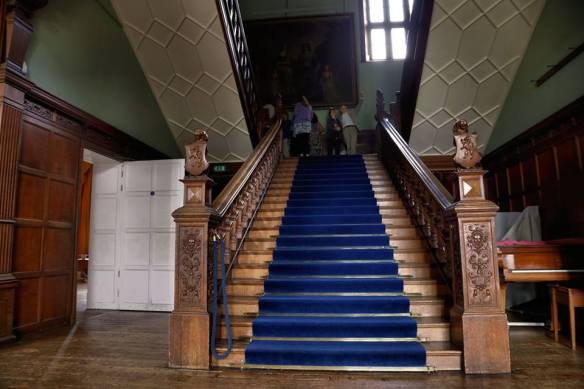 The grand staircase aka The Blue Staircase. By Jason Kirkham

As far as I can see, there is no portrait of Francis Talbot. Perhaps it was destroyed in the devastating fire which swept through the hall on the night of 12th October 1882.  Unfortunately, no inventory was taken until afterwards. A contemporary account tells us that, “Some valuable paintings…were saved”, but that “The grand historical paintings on the staircase, however, were all destroyed”.

Hanging on the staircase in the place of these lost paintings are portraits which reflect a chapter in the history of the hall’s present owners, Sandwell Metropolitan Borough Council. There are paintings of the Earl of Dartmouth, and Alderman Reuben Farley who persuaded him to lease part of his estate for a nominal rent of £1 in order that a park could be established for the people of West Bromwich. Under Sandwell Council’s ownership, the hall is used mainly as a residential arts centre, although it can also be hired out for weddings. I’m sure that dreams of having a photograph taken on the grand blue staircase in a nice white frock have influenced many a prospective bride’s decision in choosing Ingestre as the setting for their big day. 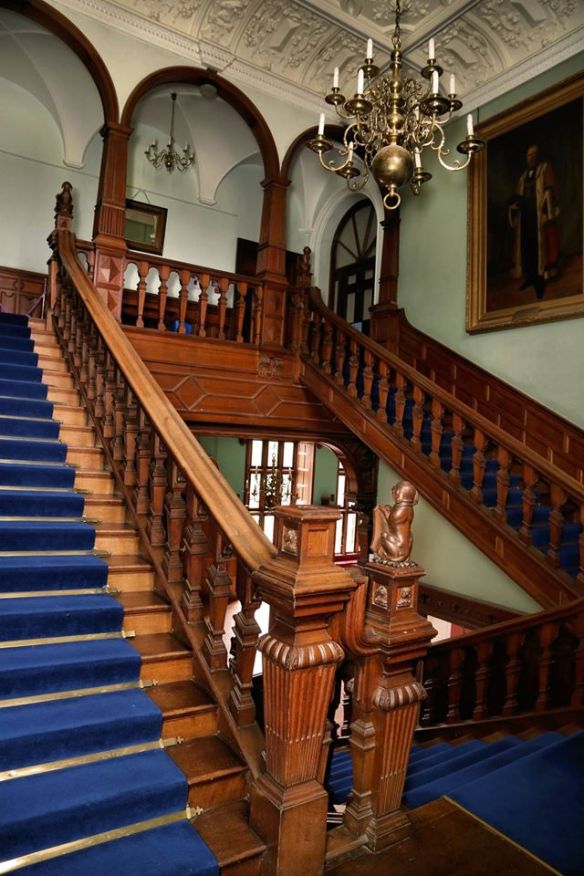 Impressive as the grand staircase is, it was the nearby secret staircase hidden behind a wall which captured my imagination. Leading to what was easily the shabbiest of all the rooms we saw, it would be quite easy to believe that no-one else had stepped inside here since 1961. 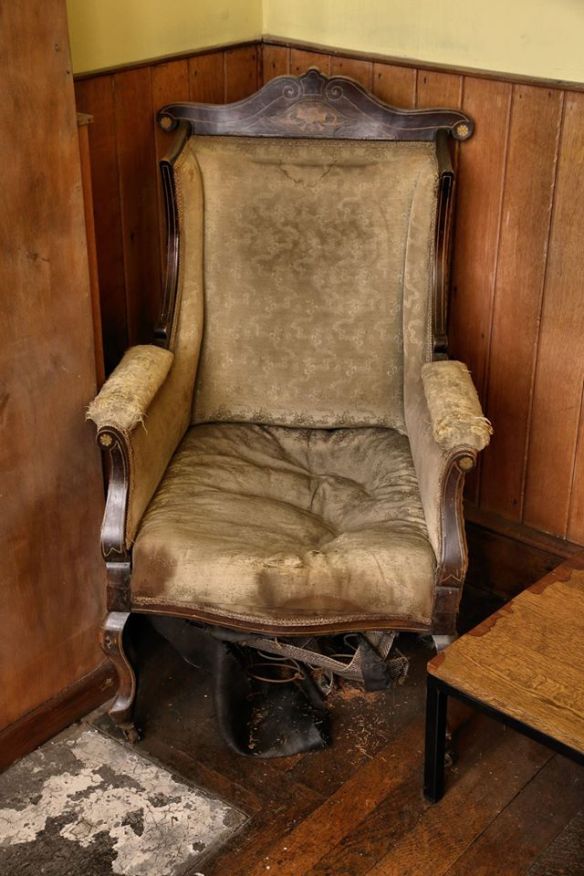 Inside the not-so-secret waiting room. By Jason Kirkham

It’s thought the room may have been used by those waiting for a signal from the Pavilion to tell them that the coast was clear for illicit night time activities of some description to commence.  If only those carved Talbot dogs could talk… 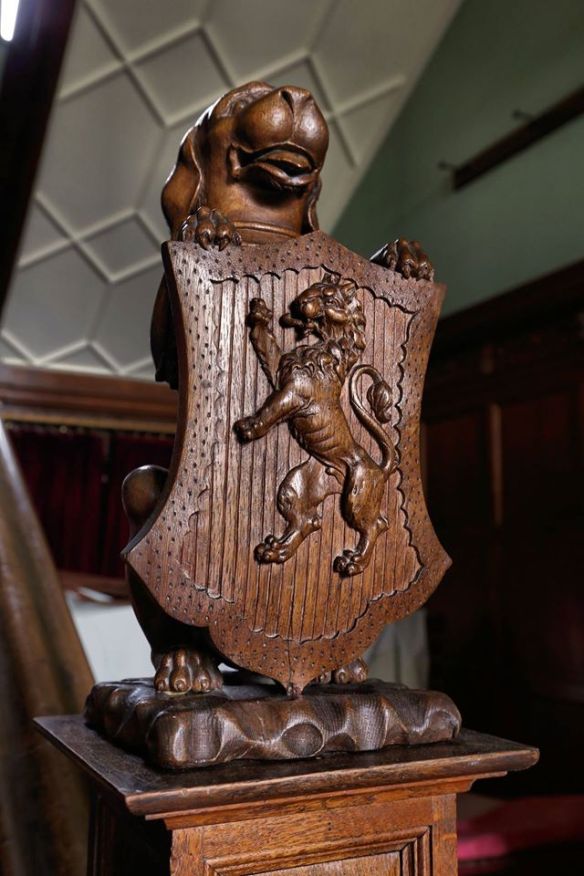 One of the many Talbot dogs at Ingestre. By Jason Kirkham

In the library. By Jason Kirkham

There’s yet another concealed door in the library, in a bookshelf full of pretend books. As Joss Musgrove Knibb from the Lichfield Gazette pointed out to me, even more shocking than this literary deception is that whoever was responsible didn’t even take the opportunity to include puns along the lines of, ‘Percy Vere, in 15 large volumes’ as they had done at Chatsworth. Seems the conclusion to be drawn from an afternoon at Ingestre is this – it’s the paintings and not the books which tell the stories here.

Notes: Thanks to Jason Kirkham of UK Urbex, who has very kindly let me use his photographs as I forgot my camera. And then couldn’t download the ones I took on my phone. (Let’s be honest, it’s probably worked out better that way)

I had to pop into Wolverhampton today. I knew from my search for an ancient cross in Lichfield a couple of years back that there was a Saxon cross shaft here and went to find it.  Unlike the Lichfield cross, I didn’t have to try too hard – it’s huge! Its size, and also the fact that it is made from sandstone not found in Wolverhampton, has led some archaeology types to suggest that it is probably a reused Roman column, possibly from Wroxeter or even just up the road in Wall.

The elements and pollution have not treated the shaft kindly but its still clear that this was an incredible piece of craftmanship – the Black Country History website describes it as, ‘one of the finest cross shafts in the Midlands’. The carvings of acanthus leaves which decorate the shaft alongside those of birds and beasts have given archaeologists some problems when trying to establish a date as they suggest different periods. The plaque accompanying the shaft in the churchyard has decided to go with the earlier date of the ninth century, whilst others believe late tenth century is more accurate.

On the way out of the churchyard I noticed another stone with a good back story. Known as the Bargain Stone, its said to be where the good (and probably not so good) folk of Wolverhampton would agree sales and make deals by shaking hands through the hole. The nearby plaque suggests it is an old gargoyle and the hole is what remains of its mouth. 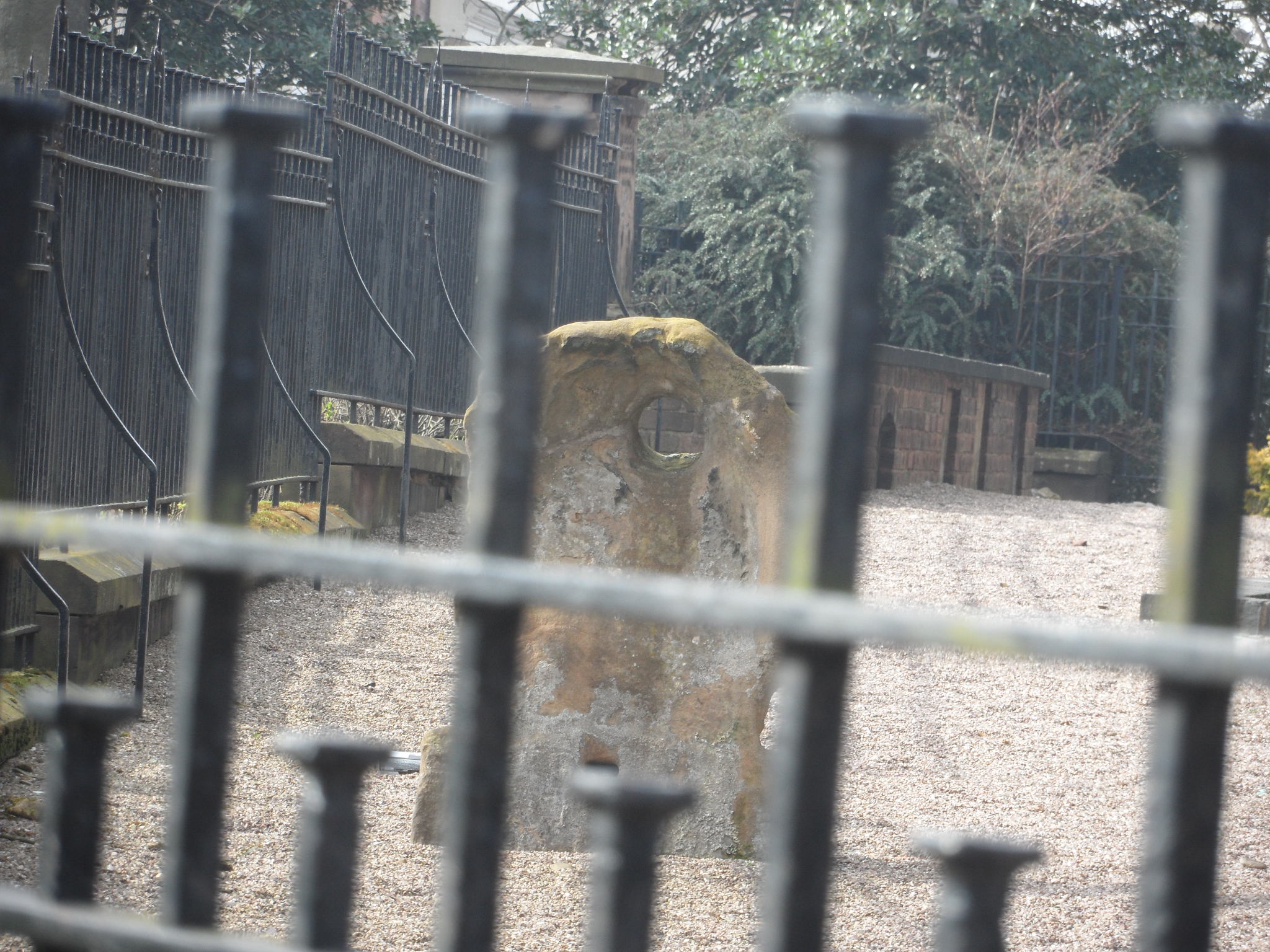 Talking of hands, why didn’t it occur to me to put my hands over the railings to take a better photo?

As if ancient crosses and stones weren’t enough of a treat, we also found Holden’s Brewery’s Great Western near to the train station. This is a proper pub – cobs on the bar, Holden’s Golden Glow (amongst other delights) on tap and really friendly staff. Although we were tempted to sit outside in the sun, the interior was so quirky and there was such a nice atmosphere, we sat inside. 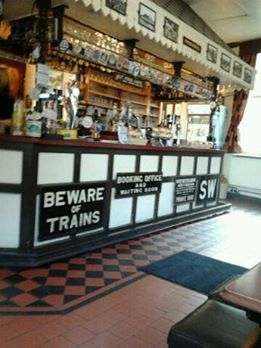 Wished I’d got the train. Definitely not driving next time.

We walked off our pork baps with a little bit of a wander around the city streets. This building caught my eye, not only because it has no floors, meaning you can see down into the cellar, but also because of the handwritten sign someone had stuck to the window. 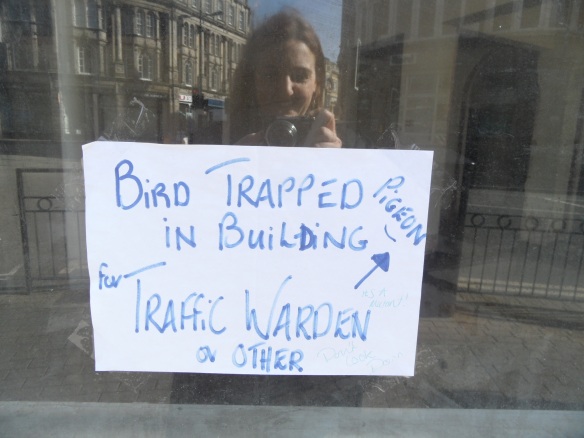 I’m not sure a traffic warden would be the person I’d turn to in a trapped bird scenario but maybe they do things differently in Wolverhampton.

Another perplexing sign is the one suggesting that the half timbered building on the junction of Victoria St and St John’s Lane was built in AD1300. It wasn’t and no-one knows the reason behind the claim – the best suggestions anyone has seems to be that it was some kind of joke to emphasise that it was a really, really old building! It more likely dates back to the seventeenth century when it was once an inn known as The Hand. These days its home to Wolverhampton Books & Collectables, where you can buy anything from an ancient tome on the history of Staffordshire to a souvenir 1950s Wolverhampton Wanderers hankerchief (which you may, or may not, wish to blow your nose on, depending on your allegiances…). 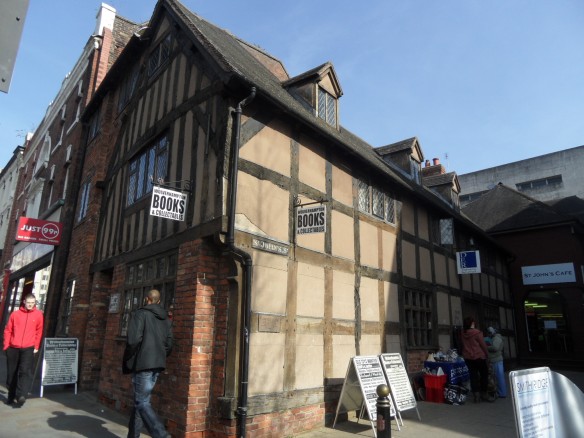 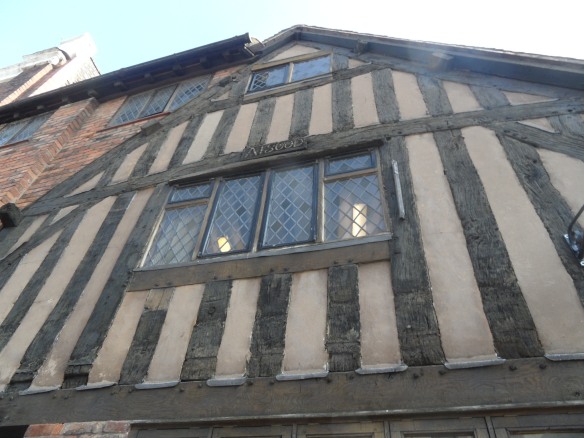 We took the scenic route back to Lichfield (not through choice but because I went the wrong way on the ring road), passing through Wednesfield, Sneyd, the intriguingly named New Invention and Brownhills before stopping off at Waitrose for a couple bottles of Golden Glow.

I vaguely knew the story of Thomas Day and his attempt to mould a perfect wife from one of two orphan girls, that he ‘acquired’. However, until I read ‘How to create the perfect wife’, by Wendy Moore, I hadn’t appreciated just how much of an ordeal Day subjected the two young girls to.

After taking them from the orphanage, Day took the girls, Sabrina and Lucretia, to France, where they lived a life of drudgery and servitude.  On their return to England, Day decided to focus his efforts on Sabrina, and packed Lucretia off to be a milliner’s apprentice. Sabrina was brought to Lichfield, where they became part of the social circle that included Anna Seward, Erasmus Darwin and members of the Lunar Society. Sabrina and Day lived at Stowe House, and it was here that some of his worst treatment of the girl took place. As well as making Sabrina carry out all of the household tasks in the four storey house looking over Stowe Pool, Day subjected her to sadistic ‘training’ designed to develop stamina, strength and courage. Apparently, despite knowing that she was unable to swim,  Day even forced the poor child into the waters of the pool itself on one occasion. Once soaked through, Day made her lie in one of the nearby fields until she dried out.

Although many in Lichfield knew of Day’s experiment, Wendy Moore believes that a combination of Day’s money and background, and the fact that many of his Lichfield ‘friends’ had their own scandals to deal with, meant that a blind eye was turned to his treatment of the girl.

Day eventually decided Sabrina wasn’t suitable and so she too was sent away, whilst Day turned his attentions elsewhere. Whilst the book explores Day’s continuing quest for the perfect wife, it was the story of what happened to Sabrina that I was really interested in. Thankfully,  Wendy Moore does not abandon Sabrina as Day did and follows her life up until the end, thereby allowing us to know the full story of Sabrina as a person in her own right, and not just as part of a bizarre experiment carried out by a cruel and irresponsible man.

‘How to create the perfect wife’ by Wendy Moore is published by Orion. Details here.