During the last couple of weeks, if you’ve walked along the path that runs along the top of Beacon Park (between the A51 and the football pitches), chances are that you might have spotted this pile of moss covered stones. A lot of the vegetation in this area has been removed recently, making their presence much more obvious than when I first came across them in Spring last year. 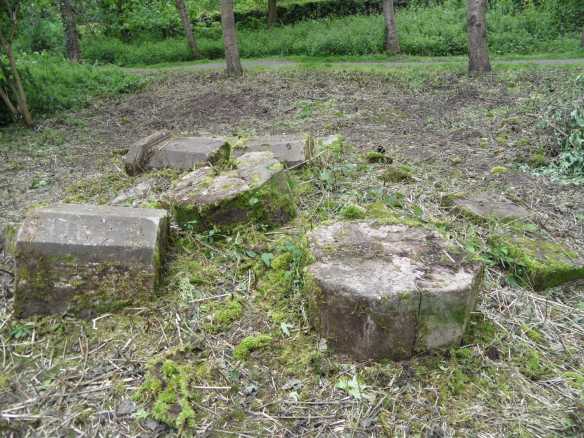 Back when I first noticed them, I did a bit of asking around and I was given three different stories regarding their provenance. The most likely explanation came from someone at Lichfield District Council who said that the stonework was a section of the balustrade which runs around the park at the Beacon Street/Bird Street entrance, which had been removed to make a new corner entrance (near to the Chandlers kiosk/public toilets) sometime in the 1980s. However, someone else thought that the stones were what remained of a structure belonging to the farm which once occupied this area of the park and another person suggested that they were part of some sort of tower which was at Stowe Pool until it was dismantled after becoming structurally unsafe.

Last week, Bob Houghton, from the Burntwood Family History Group and Lichfield and Hatherton Canal Restoration Trust noticed them and sent me an email to say that some of the people who work at the park had told him that they were from the old post office which once stood on Bird Street, where Ego now is. So now we have yet another explanation!

To be honest, I’m torn between the truth and enjoying the ongoing speculation about what the stones are and how they came to be in a patch of woodland in the park. As the moss grows fat on these old stones, I hope that the stories keep growing too. 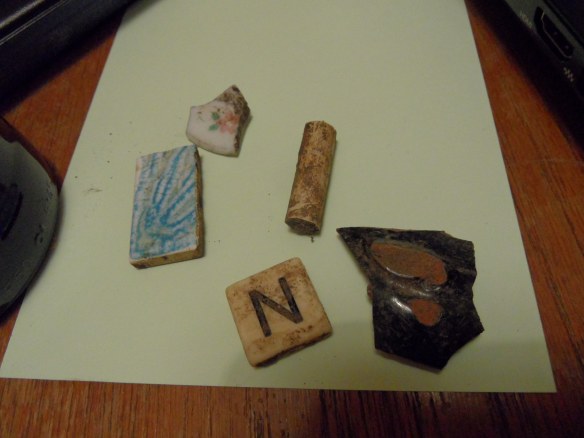 The last time I walked past the stones,  I found a handful of bits and bobs scattered around them.  I’m pretty sure these are jigsaw pieces to other stories and nothing at all to do with this little puzzle. However,  if you want to include a scrabble tile, some pottery, a piece of tile and an old clay pipe into your version of the story, then please feel free!

With a long awaited cafe & kiosk opening in Beacon Park this week, it reminded me that I wanted to have a look at the reuse of old buildings parts in Lichfield.

The connection? Well, the new Chandlers Cafe is in the 1930’s mock tudor building on the edge of Beacon Park. According to a plaque, it incorporates materials from the old Friary. I’d love to find some records that confirm whether or not this is true and if so,  how this came to be. 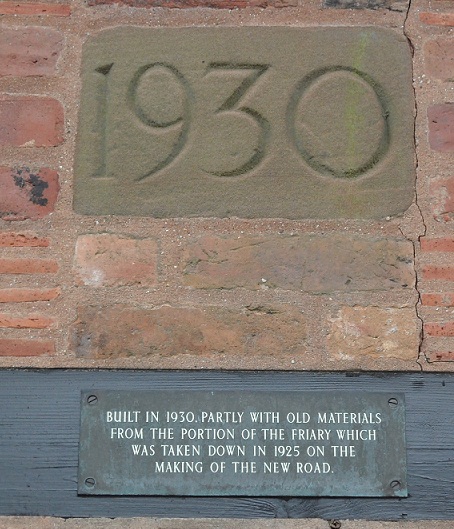 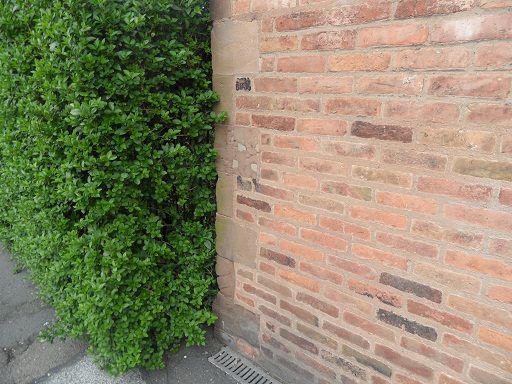 The provenance of the nearby balustrade running around Beacon Park is more of a mystery. Both Annette Rubery and myself have so far drawn a blank when attempting to discover its origins. Did this start life elsewhere? 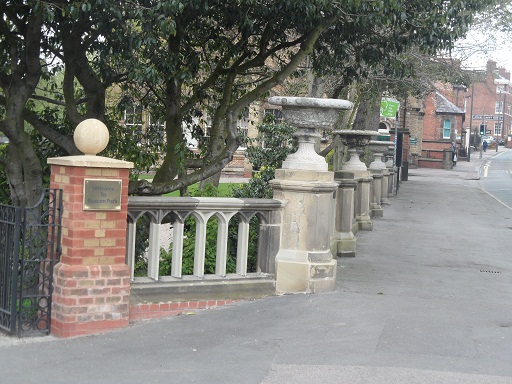 More information is available on the balustrade running around the Garden of Remembrance opposite, albeit a little contradictory. The listed building description suggests that the balustrade came from Moxhull Hall in Wishaw, although Lichfield DC’s website disagrees, saying that it came from Shenstone Court, and that it’s the stone lions on the pillars that come from  Moxhull Hall. Does anyone know any different? 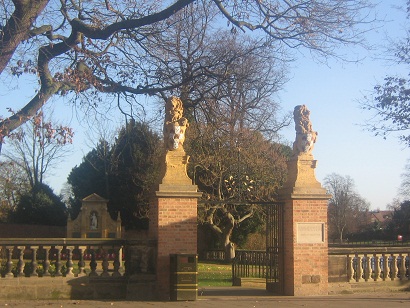 If the balustrade is from Shenstone Court, then its not the only bit of that old house we’re supposed to have made use of here in Lichfield! The portico at the entrance to the site of the Friary is also said to have been salvaged from the demolition of the Cooper Family mansion. However, according to the Lichfield Council Conservation Area Document, this is one of ‘countless unsubstantiated stories about the portico coming from important buildings in the Lichfield area and ‘it is equally possible that it was made in 1937’. I think this might be another one for further investigation!

Finally, for this post at least, there’s the Old Stables in The Close (formerly the Visitors Study Centre). These belonged to Bishop Hacket’s now demolished house which stood on this site until 1799.   Material from the remains of the walls of The Close, from the heavily damaged, original Bishops Palace, and possibly even the Cathedral itself are thought to have been used during construction of these buildings, which are alongside Chapters Restaurant. 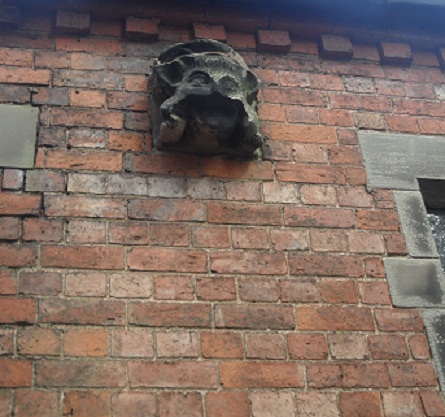 I’m sure there must be more in Lichfield –  I’ve even seen garden walls built with what looks like the remnants of old buildings. If anyone knows of any more examples,  I’d love to hear. In the meantime, I’ve heard that there may be more parts of Fisherwick Hall to track down….