Hot on the hooves of Lichfield’s Sheriff’s Ride comes another ancient Staffordshire tradition – the Abbots Bromley Horn Dance. No one knows just how ancient though. The earliest written record of the dance seems to be from Dr Robert Plot’s ‘Natural History of Staffordshire’ in 1686, yet the reindeer antlers themselves have been carbon dated to around one thousand years ago.

The Horn Dance c.1900. Apparently the splendid costumes are a Victorian invention. The original costumes were made by the vicar’s daughters from old bed curtains! The latest set of costumes were created at the turn of the millenium. On the subject of costumes, I love that the man dressed as a woman is wearing his shirt and tie beneath his!
Image from Sir Benjamin Stone’s Pictures – Festivals, Ceremonies and Customs. Published by Cassell & Co. London. 1906 (taken from Wikipedia)

Last night, we arrived as the dancers were weaving their way around the back lanes of Abbots Bromley, and so we settled for a while in The Crown and awaited their return to the village green. Outside the crowds were entertained by the Lichfield Morris Men and the Beggars’ Oak Clog Dancers amongst others. Sitting there in the pub I saw horns everywhere – antlers on the village sign, antler inspired light fittings and, sitting on a bench opposite, a man wearing furry antlers. We rejoined the crowd, as the dancers made their way up the High Street, taking up their position outside the Crown to applause. At first it’s the horns that command your attention – they’re enormous (apparently, the largest set weighs over 25lbs). Then gradually your peripherary vision kicks in and you spot the other characters – a man dressed as a woman, the young boy shooting the hobby horse, over and over again and the musicians accompanied by a child playing the triangle. Fortunately, I managed to avoid the Fool and his pig’s bladder…

In ‘England in Particular’, the authors describe the dance as both unsettling and reassuring. I know what they mean. What you’re watching has a significance that is no longer makes much sense to our modern eyes, its symbolism like some long forgotten language. Yet there’s also something very British and familiar about the occasion in the scout tent set up over on the green, selling curry to the beer drinking crowds chatting together beneath umbrellas.

If this is a pagan fertility ritual, it seems to get along well with Christianity these days. The horns are kept in St Nicholas’s church for 364 days a year, and before the horns are taken out on their annual excursion around the village there is a short blessing. The dance is performed outside the Abbots Bromley throughout the year but I understand that a second set of horns are kept for this purpose, these original horns never leave the village. There is a great story in a book on the dance by Jack Brown of the English Folk Dance and Song Society that I bought from the Oxfam bookshop. Apparently, in the 19th century, the dancers took a set of elk horns dancing in Burton and having consumed quite a lot of rum, managed to lose them. Some say the horns were stolen; others say the dancers decided they were too heavy and deposited them into the River Trent so they didn’t have to carry them all the way back to Abbots Bromley!

It’s fantastic to have such a unique tradition taking place just ten miles or so up the road from Lichfield and although I’ve popped a few (rubbish) photos on here to give you an idea, it goes with out saying that there’s nothing like going along and experiencing it for yourself. So, put it in your diary for the next Monday after the first Sunday after the fourth of September 2014!

Note – I could claim that the blurriness of the dancers and musicians on the following photographs is an artistic statement on the passage of time or something, but in actual fact they’re just really BAD photos! Anyway, the chap with furry antlers is on one of them which warrants its inclusion. 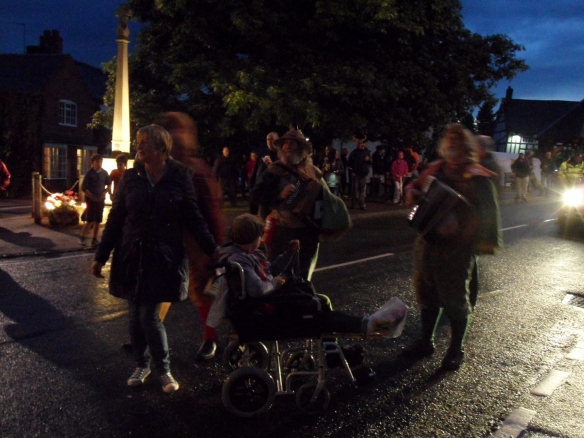 England in Particular by Sue Clifford and Angela King

4 thoughts on “A Dance to the Music of Time”