Almost a year has passed since a group of us got together in St Stephen’s Church, Fradley to talk about how we could record and tell the stories of RAF Lichfield, Staffordshire’s busiest World War Two airfield.

One of the most interesting challenges for me is sifting out fact from fiction. People may think the realms of folklore with its fantastical beasts and quirky customs is a whimsical world away from stiff upper lips and smart uniforms, but airfields have their own rich mythologies. I’d no idea until recently that the RAF even had their own monsters – gremlins were mischievous creatures who hung out in hangars, ready to wreak havoc with aircraft and cause all kinds of technical trouble. 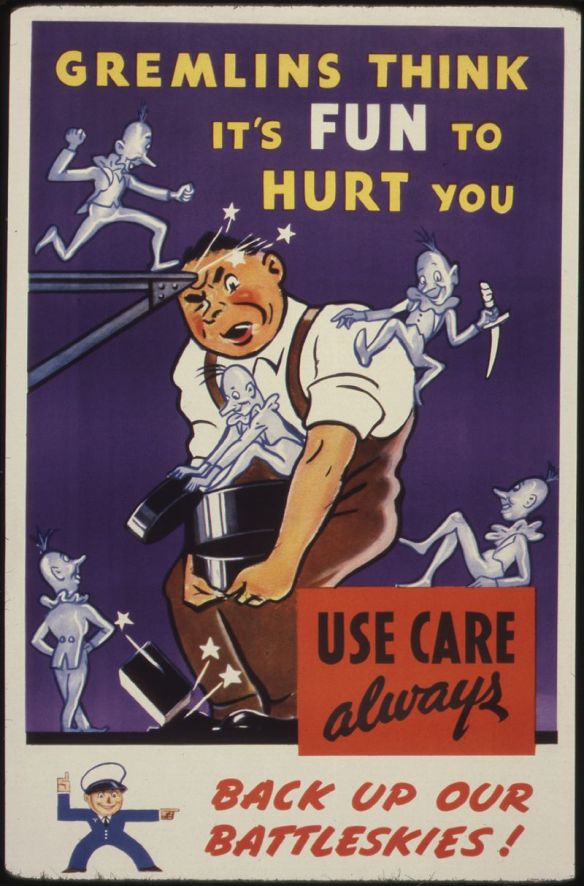 In an RAF twist on legends of buried treasure, parts of old aircraft are rumoured to be buried beneath the fields of Fradley. At one of the recent meetings we heard a story from a villager about a plane losing control and hitting an oak tree before crashing into farmland, its engine still supposedly embedded in the ground. We’ve tried (and so far failed) to identify the oak tree and even if we were to, is it likely that this kind of debris would have just been left to rust in a field? After a bit of reading, I’m leaning towards maybe. Earlier this year, a Danish teenager decided he’d investigate a story told to him by his grandfather about a German plane which had crashed on moorland in December 1944. Using metal detectors, Daniel, his friends and his Dad discovered the remains of the aircraft, including its Daimler-Benz engine, and the remains of the pilot with condoms, ammunition, a diary, ration coupons, cigarettes and a wallet emblazoned with a swastika in his jacket pocket. The full story is here. Regarding Fradley specifically, I found an interesting comment on the Airfield Research group forum, which I hope the person who posted it doesn’t mind me sharing here.

“As a member of 1206 Sqn back in early 70’s we had a talk from one of our civvy instructors who had been at the base during the war. He told us of a Wellington that had crash-landed just outside the field and had blown up early next morning killing several fire crew members. We visited the spot and found a large crater, in the bottom of this there were large amounts of RAF related debris, on digging deeper we found a Wellington seat, control column, various instruments….. we came back on the Midland Red bus lugging the seat with us. The items formed part of the relic collection we set up in the ATC hut in Cherry Orchard…….. All this material was apparently thrown away by later C.O. during some tidy up campaign…
My father was stationed at RAF Fradley in early 50’s and he told me the site of the crater was used as one of many rubbish tipping places around the base….. as MT driver he would have known where these were. It explained a lot of the RAF pottery and other debris we found on the surface. The site was close to the Go-Kart track and unfortunately the crater was filled in sometime back in the late 1980’s……..
As for buried aircraft parts on the field……….. those rumours were about in the early 70’s, I talked to a lot of locals and ex-RAF from the base who set up home in Lichfield area…….. never met anyone who had ever seen such pits being dug or items being sent there. Spent hundreds of hours as a kid scouring the area, never found anything apart from the crater site and what I believe was a jet crash site in some woods with aircraft cockpit parts scattered around

It is a fact that after the war, RAF Lichfield was used to break up aircraft including 900 Typhoons, 500 Liberators and 150 Fortresses. I found an article in the Lichfield Mercury on 14th April 1950 about a scrap dealer from Upper Gornal who had been charged with stealing four Oxford aircraft fuel tanks and two engine cowlings, whilst contracted to removed scrap from eight Mosquitos. ‘For security reasons’ (such as?), the latter had to be burned before the metal scrap was collected. The crime had been committed in the area of the airfield known as ‘the graveyard’, but did this literally refer to a place where craft were buried? And if so, are they still there?

Another story about RAF Lichfield is that one pilot overshot the runway and landed in the Trent and Mersey Canal. I’ve heard it from three separate sources but did this actually happen here or is it a story that has been transposed to Fradley? We know at RAF Wheaton Aston,  a P-47 Thunderbolt of the 495 Fighter Training Group crashed into the Shropshire Union Canal as there is photographic evidence but to illustrate how unreliable local stories can be, the banks of the Shroppie canal between bridges 20 and 21 are said to be haunted by the pilot who lost his life in the crash. Except he didn’t –  the only fatalities on this occasion were two cows because they, ahem, didn’t moove out of the way quick enough.  I love stories but we have to take our oral history with a pinch of salt for that very reason – so does everyone else! There’s a book called ‘The Storytelling Animal’ by Jonathan Gottschall that I’ve just found out about which puts forward theories about why humans like stories and why we favour are those which stretch the truth. Perhaps I’ll come back to this once I’ve read it but I’m veering wildly off course myself, and so back to Fradley, and something a little more tangible.

Along with the rest of the heritage group, earlier this month I was lucky enough to have been given access to several old airfield buildings which survive on the site of Palletways, at the industrial estate now known as Fradley Park. There are also two underground bunkers nearby, almost invisible beneath vegetation but winter should reveal more and a return trip may be in order. I featured some of the other surviving buildings of RAF Lichfield, including bomb stores, in this post here.

Entrance to the guard room. Interestingly, this is where the scrap metal dealer who took the Oxford parts was taken for questioning 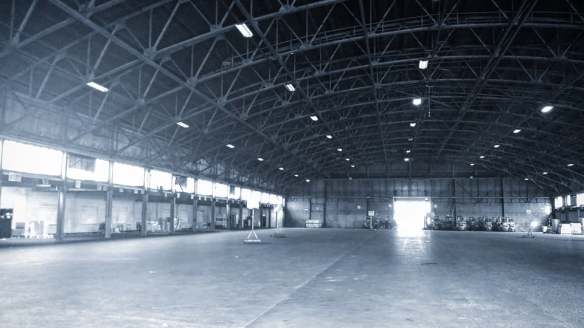 Inside of of the surviving hangars, now used by Palletway

The door says messroom but it’s in the building described on maps as the Guard Room – was this usual?

I’ve seen this described both as the mortuary and also, as a gas decontamination building. Perhaps it had a dual purpose?

As at so many other airfields, there are some that say ghosts walk here. I don’t believe they do, but that doesn’t mean that the presence of those who lived, and those who died here isn’t felt in other ways.  Our group is committed to continuing to record the stories of this place and its people. We meet on the third Monday of each month at 7.30pm at St Stephen’s Church in Fradley, and our next meeting is Monday 20th November, and anyone with an interest in the history of RAF Lichfield is very welcome to come and get involved.

8 thoughts on “Taking the air”