Recently, someone told me that there were some interesting gravestones at Holy Cross Catholic church on Upper Saint John St. As David Moore is on the lookout for examples of symbolism in the city’s churchyards for his upcoming Lichfield Discovered talk on the subject in September, I went to take a look.

Initially, I thought there had been a mistake as I couldn’t see any gravestones at all, but tucked around the side of the church I found just the three of them, side by side.

The inscriptions are worn but the names are still legible. Names that I recognised at once. Around this time last year,  I wrote about the Corfield family who lost their lives when a fire swept through their home and business premises in Market Street in January 1873 (see here) and how rumour and legend had grown up around the tragedy.  It’s not so much the symbolism that is interesting here but the additional inscription on the middle stone – ‘Refused admission into St Michael’s Churchyard’. What does this mean exactly? It seems to contradict the Lichfield Mercury report from January 18th 1873 that,

‘The remains of the seven members of the family were conveyed in three hearses to St Michael’s Church-yard on Thursday afternoon and laid together in a square grave. The whole of the burial service was read at the grave by the Rector, the Rev J J Serjeantson; the burial service according to the Roman Catholic ritual, to which community the deceased belonged, had been read over the bodies by the Catholic priest at the Guildhall on Wednesday evening. The bodies were not taken in the church’.

All I can think is that it was these memorial stones which were not admitted into the churchyard at St Michael’s? Any thoughts or comments would be welcome. 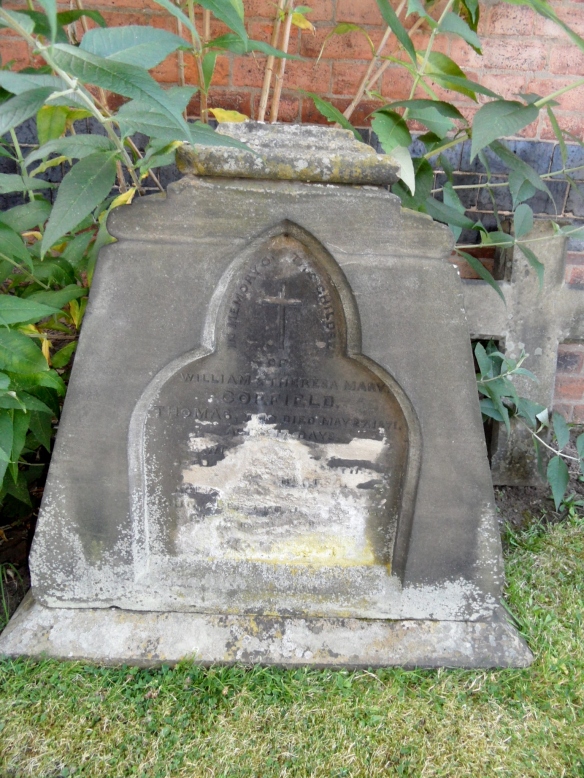 2 thoughts on “A Grave Matter”