I had an email from Pat telling me there was a lump on the side of the A51, near to the junction with Abnalls Lane.  I assumed that it was an old tree stump, but Pat thinks it might be something more than that, and recalls seeing some stone there last year.

I went and had a closer look. Pat said in his comment on the Cross City post, the lump is covered in vegetation, but there is likely to be something solid underneath, as the grass is cut around it. I took a few photos and then the self -conciousness of being stood on a busy A-road taking photos of a grassy lump got the better of me and I headed back up Abnalls Lane. 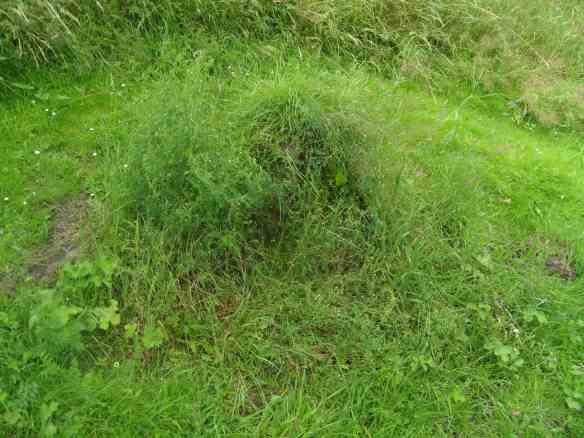 So, does anyone else know anything about this, or do we just have to wait until the grass dies away in the Autumn to get a better look?!

In the meantime, it’s worth taking a trip up Abnalls Lane. In parts, it’s thought to be a holloway, and at times you’re surrounded by hedgerows, tree roots and sandstone, with carved names and dripping water.  It takes you past the site of one of Lichfield’s Scheduled Ancient Monuments – a moated site on the edge of Pipe Green and over the border into Burntwood.  It also passes nearby the site of Erasmus Darwin’s botanical garden, although unfortunately the site is not open to the public.

Interestingly, a section on Burntwood in the History of the County of  Stafford says that,

The road, now Abnalls Lane, was known as Pipe Lane at least between 1464 and 1683.  The point where it goes over the boundary was described in 1597 as ‘the place where the broken cross in Pipe Lane stood’; a ditch at Broken Cross was mentioned in 1467.

Is this one of the crosses already counted in Cross City, or a different one?

Also, on the subject of research into stone things, at the end of Abnalls Lane, there are some interesting names – The Roche and Hobstonehill (according to the History of the County of Stafford, the placename ‘Hobbestone’ was mentioned in 1392).

I think I need to spend my summer holidays at Lichfield Record Office.