The introduction to the guidebook for Holy Trinity at Eccleshall includes the following modern version of Psalm 84 Verse 10,  “I’d rather scrub the floors in the house of my God than be honoured as a guest in the palace of sin”. 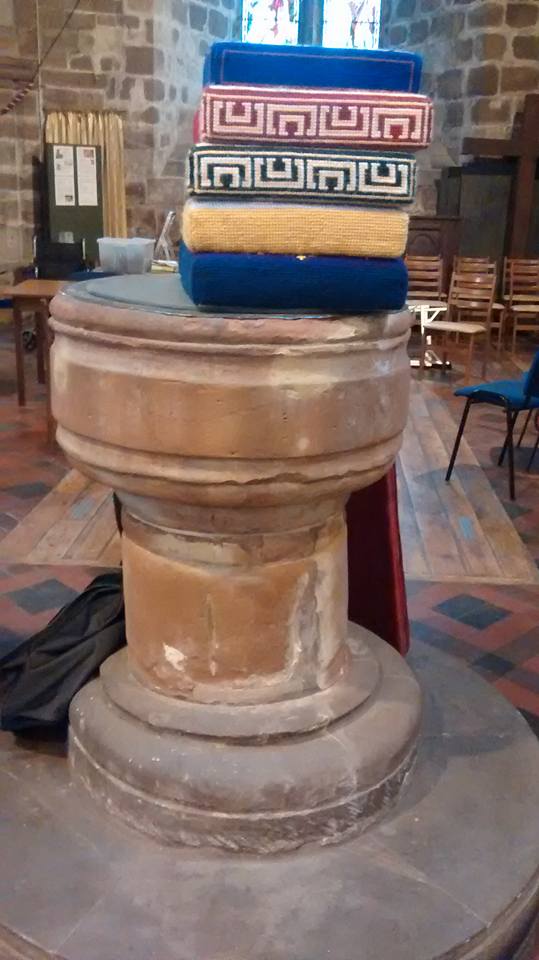 Appropriate then that my brilliant friend Patti Wills and I had inadvertently visited on the day the church was being spring cleaned. I may have had to climb over a vaccum cleaner to see a stone effigy at at the entrance to the tower but the bonus was that parts of the church that wouldn’t normally have been open were. And in addition, there were some very nice people there to point out the locations of the tombs of the Bishops of Lichfield who are buried here. 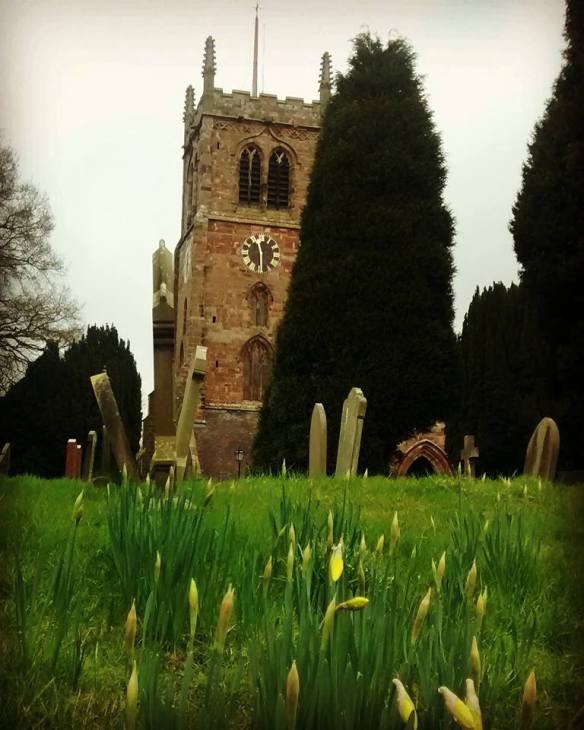 Near the altar are the tombs of William Overton (1525 – 1609) who was responsible for bringing French glassmakers to the area, with furnaces set up in the nearby Bishop’s Wood and James Bowstead (1801 – 1843) the former Bishop of Sodor (I honestly thought this was a made up place in Thomas the Tank Engine until now) and Man who became the Bishop of Lichfield (but not Coventry) in 1840. Extra information given on a card in the church (which I almost stole after getting distracted by some fossils) includes the slightly odd story that his mother’s grave states that she once prophesised that James would become the Bishop of two Sees. Think that warrants further investigation.

I promise I took it back!

In the Choir Vestry, relocated from the Chantry, is the tomb of Thomas Bentham (1513 – 1578) who became the first Bishop of Lichfield under Elizabeth I and also the first who was a married man. There are also two fragments of a Saxon preaching cross, one featuring two figures separated by a tree and the other, a man and a horse. The pair of figures on the former have been interpreted by some as Adam and Eve alongside the Tree of Life and the figure on the latter as a possible early representation of St Chad, who was of course the first Bishop of Lichfield. Although there is little other evidence at present, the presence of the cross and the name Eccleshall itself suggest that there may have been an early Christian community here. According to Horovitz, the Eccles element of the name derives from the Welsh word for exactly that.

John Lonsdale (1788 – 1867), the last Bishop of Lichfield to live in Eccleshall Castle, has a commemorative tablet on the south wall of the Chancel and is buried in the churchyard here although he also has an effigy in Lichfield Cathedral. I’m also assuming that Robert Wright, the Bishop who died at Eccleshall Castle in September 1643 and whose burial was delayed as the castle was under siege from the parliamentarians, was eventually laid to rest somewhere here too. According to the church guide, this stone was once thought to have been his badly worn effigy but as it has been dated to a much earlier period that can’t be Wright. Sorry right. 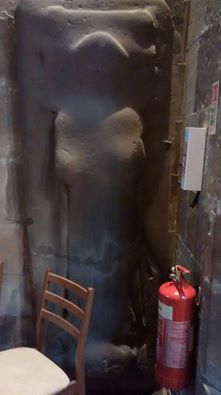 Over in the Old Baptistry, one of those areas of the church which is usually locked but was open for dusting, is the tomb of Bishop Richard Samson (c.1470 – 1554) who gained favour with Henry VIII thanks to his support for the King’s divorce from Catherine of Aragon. On top of the tomb someone has carved the outline of a hand complete with a bracelet (as on the porch of Longdon Church here).

We were excited about this graffiti find and so was the man with the duster when we told him about it. In the Baptistry, there are also three medieval misericords from the old choir stalls displayed on the wall here, each with images that hint at stories and imagery that possibly wouldn’t be found in Psalm 84 or anywhere else in the Bible.  Patti told me that due to their purpose in life it was deemed inappropriate to decorate misericords with saints and angels and other religious imagery. Instead, the craftsmen were given a free reign, carving everyday, humorous or folkloric scenes of a far more earthy than heavenly nature. If any of you are regulars at the palace of sin and can tell us the meaning behind any of these carvings, Patti and I will be eternally grateful. Note: You can count. I’ve only included two of the three because the photo of the third has come out as a blurry bit of wood. I blame the polish fumes.

Horovitz, D. (2003) A Survey and Analysis of the Place-Names of Staffordshire

The awesome knowledge of Patti Wills

Lichfield ‘The Cathedral’ A History of the County of Stafford : Volume 14 Lichfield ed M W Greenslade (1990)