Where there’s an old wooden beam, there’s often a rumour that it originated on an old ship. It’s a bit of folklore that I keep encountering time and time again, even here in landlocked Lichfield and Staffordshire. Back in 2011, I visited St John’s Hospital during the Lichfield Heritage Weekend and heard that the Master’s House, which was originally the canons’ and pilgrims’ hall and enlarged by Bishop Smythe in the late fifteenth century, was built using beams from galleons. On the ghost tour earlier this month, we were told that that wooden beams in an entry running alongside the Walter Smith butcher shop on Market Street came from old ships and when researching the Four Crosses Inn in Cannock for a piece in the Chase Gazette, I once again came across claims that the oldest part the building, dating to 1636, made use of timber from ships. 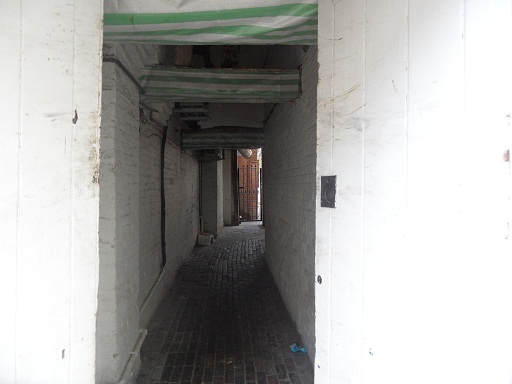 Alongside butcher shop on Market St. Beams are covered in stripy plastic on this photo unfortunately, but every now and again the alley is open for you to go and take a look…

Last night, a discussion on Twitter about those other two old inn regulars – ghosts and Dick Turpin – moved onto the subject on the use of old ships’ beams and a quick google search revealed yet more old Midlands buildings making the claim including the Ye Olde Gate Inn in the Derbyshire village of Brassington and the appropriately named Old Ship Inn in Worksop, Nottinghamshire. Could there be any truth in any of these claims? As someone unfamiliar with the world of carpentry, I was interested to read a discussion between some experts on the matter which you can read here. Just as I was sure that this myth was pretty much busted I clicked on the link in the penultimate comment, which took me here – a website telling the story of the lost Brig Elizabeth Jane, launched in Nova Scotia in 1817 and abandoned off the Yorkshire coast in 1854. Incredibly, the name board and the port of registration board were discovered in a ceiling in Robin Hood’s Bay in 2003 leaving no doubt that this was one case where the rumours were true.

A one off perhaps? It seems not as shortly aftewards I came across the website of the Chesapeake Mill in Hampshire, where the beams, joists and floors are all said to have been constructed from the United States frigate ‘The Chesapeake’. On a slightly gory note, an extract from ‘The Navy and Army Illustrated’ in 1898, included on the  mill’s website, describes the joists as ‘covered with the blood of the men who were killed and wounded in action, and many bullets are embedded in them; in fact a good many of the timbers seem quite soaked with blood’.  You should read the full story on their website here it’s a fascinating place!

Closer to home, I found an article on Graiseley Old Hall in Wolverhampton which says that some of the purlins (now there’s a word I didn’t know existed until today!) in the roof came from old ships. What’s also interesting about this article is that it acknowledges that similar claims are made about many buildings, but that hard evidence to support it only exists in a few and then gives us a possible explanation for this, suggesting that often it could be a reference to the quality of the timber rather than where it came from.

I’d really like to hear of any more examples that people know of where old ships timbers are said to have been used, proved or otherwise.  When it comes to myths and folklore, we shouldn’t always believe everything we hear, but we should definitely listen in the first place. You never know where a story will lead.

7 thoughts on “Shiver Me Timbers”