Whilst having a browse in Lichfield Record Office,  I came across an account of more archaeological finds discovered at Minster Pool.  During the construction of a storm water sewer in the 1970s, surplus soil was taken from the pool to a council rubbish tip. One day Mr Miller, from the city’s Engineering and Surveyoring department, happened to notice fragments of Cistercian ware amongst the peaty earth and alerted local experts. On examining the tip more closely, they discovered that the soil from Minster Pool also contained lots of fragments of leather.

Mr Miller and the others had discovered the remains of medieval leather shoes from a cobbler’s workshop that had been operating near to Minster Pool between the years 1400 and 1550. It’s thought that after being repaired several times, the shoes were in such bad condition that they were discarded by the cobbler (only for them to resurface on another rubbish heap some five hundred years later!). The account I read said that after their discovery, the shoes had been taken to Lichfield Museum. On returning home I was delighted to see that some kind soul had photographed some of them and added them to the Lichfield District Council flickr stream. However, in two and a half years they’ve only had sixteen views (and I think three of those were me!) so now you know the story behind how they were found, please pop and over and take a look at them here! It’s a shame that we’ll probably never know the story of the people the shoes belonged to, or the story of the cobblers who patched them up time and time again…. 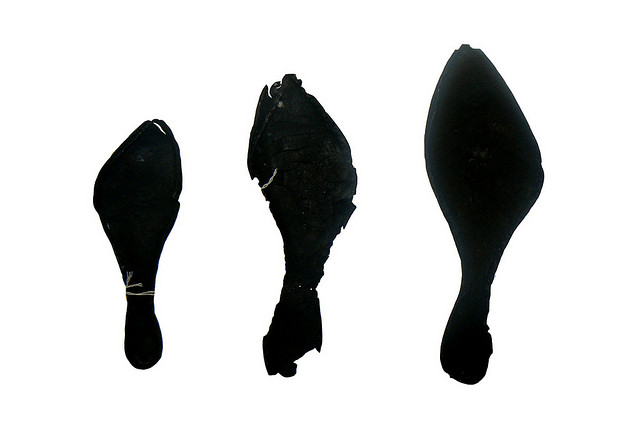