I recently read a great post about the map maker John Ogilby on Kate Shrewsday’s wonderful blog. In 1675, Mr Ogilby was the creator of the first ever British road atlas, and after reading Kate’s post, I took another look at the section of his map of the London to Chester road, as it passed over the Warwickshire border into Staffordshire and on through Lichfield. You can see the map here. 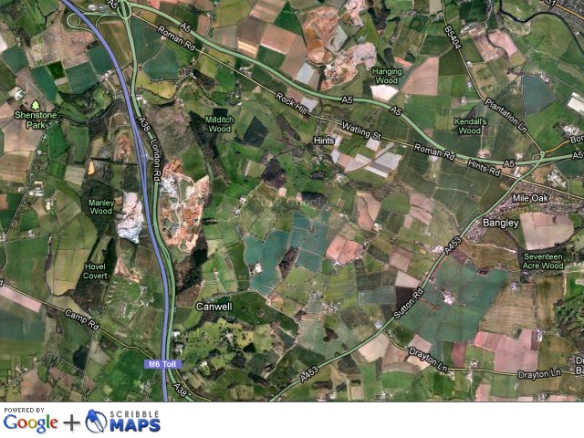 The majority of the place names are recognisable and in use today, albeit with some changes to the spelling –  Burowcop Hill, Cank Wood and Sutton Cofield amongst others.There are however a handful of names that appear to have been lost over the last three hundred or so years. One intriguing feature marked on the route is the ‘Bishop’s Heap of Stones’, eight miles or so from Lichfield, between Canwell Hall (or Sir Francis Lawley‘s Cannell Hall as it’s shown on the map) and Hints.

The name seems to refer to a literal heap of stones, and it seems there are at least two  possible explanations for why this pile of pebbles was associated with a bishop. Thomas Pennant, when writing about his journey from Chester to London, discovered a handwritten note in a copy of William Dugdale’s ‘Warwickshire’, added by Dugdale himself, which read as follows:

There is a common report (which passeth for currant amongst the vulgar) that the great heape of stones, which lyeth near the road way from Litchfeild towards Coleshill, upon Bassets heath, called the Bishops Stones, and those other lesser heapes, which lye in the valley below; were at first laid there in memorie of a bishop and his retinue, who were long since rob’d and killed, as they were travailing upon that way: but this is a meere fabulous storye: for upon an inquisition made in King James his time, concerning the extent of common upon that heath, betwixt Weeford and Sutton;there was an old woman, called old Bess of Blackbrooke, being then above an hundred yeares of age, who deposed (inter alia) that the Bishop of Exeter living then at Moore Hall: taking notice how troublesome such a number of pibble stones as then lay in the roade thereabouts, were to all passengers, caused them to be pickt up, and thus layd upon heapes

In 1769, in his book The History and Antiquities of Shenstone, in the County of Stafford, the Reverend Henry Sanders, gives a similar but more detailed explanation. Sanders says that a woman from Blackbrook came to the inquiry into the parish boundaries and testified that in the reign of Henry VIII, or just after, John Vesey, the Bishop of Exeter had decided to become a benefactor to his birthplace of Sutton Coldfield. Bishop Vesey obtained a charter of incorporation for the town, revived the market and also built a number of stone houses (1) as part of an attempt to create an industry manufacturing Kersey, as they did in Devon. Bess (I’m assuming that she is ‘the woman from Blackbrook’ Sanders refers to), also told how when the Bishop was at Sutton he was annoyed by the rolling pebbles on the road which caused travellers’ horses to stumble and sometimes fall and so he employed poor people to gather them and lay them in heaps. Sanders describes the position of these heaps as follows:

I also think these stories are fabulous, but I suspect not quite in the way that the Reverend meant! It seems the tale of the murdered bishop didn’t ever hold much weight, but what about the version given by the local centenarian (who sounds like a legend in her own right!)? Were the stones gathered by the poor at the request of a Bishop or did they serve another purpose?  It’s interesting that there may have been more than one heap. Piles of stones are of course found across the world, and have many meanings and significances. I suspect that the Bishop’s heaps of stones will have been swept away, perhaps gradually scattered back onto the roads from where they came. It’s interesting to think that even a humble pebble beneath your feet may once have been part of a much bigger story.

2 Kersey was a coarse cloth, often used to make servants clothing, and although it takes its name from the village in Suffolk, I understand that in Vesey’s time it was Devon that was at the centre of the Kersey industry in England.