Following on from my last post about Beacon Place, here are my initial attempts to discover what’s left of the estate.

Here’s a map of the Beacon Place area from 1921. It shows the the Greenhough Rd lodge, the Beacon St lodge and the Sandford St lodge (although this isn’t indicated, it’s the building near to the PH on Lower Sandford St, in the parcel of land marked 332).  It doesn’t show the Christ Church Lane lodge, but I’ve covered this elsewhere anyway. Apart from the Sandford St Lodge, which I think would have been located near to Bunkers Hill car park, the lodges are still in existence. A lot of the trees are also still there, the line running down from the icehouse to Christ Church is still very much in evidence. The fish ponds also remain of course. 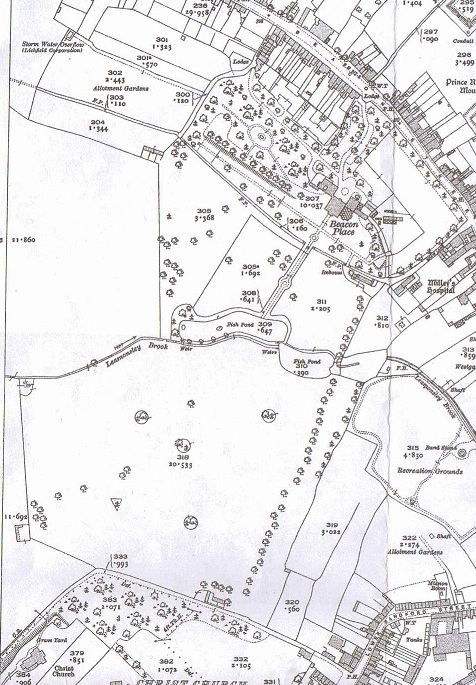 As we know the mansion no longer exists, and houses were built on the area. I think it was located somewhere in the region of Seckham Rd. What’s interesting, although I suppose it makes sense, is that the new roads in this area  seem to follow the line of the old carriage drives shown on the 1921 map. For example, if you compare the google map* below, the route of Swinfen Broun Rd is similar to the that of the carriageway from the Greenhough Rd lodge. Beaconfields seems to follow the line of the carriageway from the Beacon St lodge.

I think that the icehouse shown on the map is located between the Shaw Lane carpark and the pavilion near to the playground, where there is a definite bump in the ground which seems to correspond with the map. It doesn’t come over particularly well in the photograph unfortunately, so the next time you’re in Beacon Park, you’ll have to go and have a look yourself!

The footpath marked next to it on the map is also still in existence.

I think part of the estate’s boundary walls are between Beacon Mews and Beaconfields, on Beacon St.

There are also some walls running alongside Shaw Lane. I wonder what that gap in the wall was for? I should have taken a better picture of it!

So, these are my findings so far. I’m hoping there will be more. The map shows a couple of other buildings (e.g.two fairly near to Christ Church, some near to where the ice house), so I’d be interested to know what these were.

If anyone has anything to add (or if I’ve made any mistakes – I’m not great with maps!), please let me know. Oh and if any one wants to see any other bits of the 1921 Lichfield map, get in touch.