Apparently, this is likely to be the hottest early May bank holiday on record. It’s so warm that even the birds in my garden were sunbathing yesterday. It’s something they do to keep their feathers healthy  but I think this one might have needed a bit of factor 30, as it seemed a bit red in places.

This beautiful weather coincides with the blooming of the bluebells at my beloved Leomansley Wood. The trees which are now coming into leaf are relatively youthful but the soil here is ancient. Along with lesser celandine and wood anemones, those bluebells signal that this is a plantation on a much older site. In England, the definition of ancient woodland is land that has been continuously wooded since 1600. Given that the name Leomansley pre-dates England and indicates that there were once elm or limetrees here, this site could have been continuously wooded, well, since forever.

Leomansley Brook trickles around the edge of the wood, into Leomansley Pool in the grounds of what once was Leomansley Mill, and out again through a culvert on Pipe Green.

Once upon a time, on hot days like these, the brook would be full of kids paddling as can be seen in this clipping from a 1937 edition of the Lichfield Mercury. 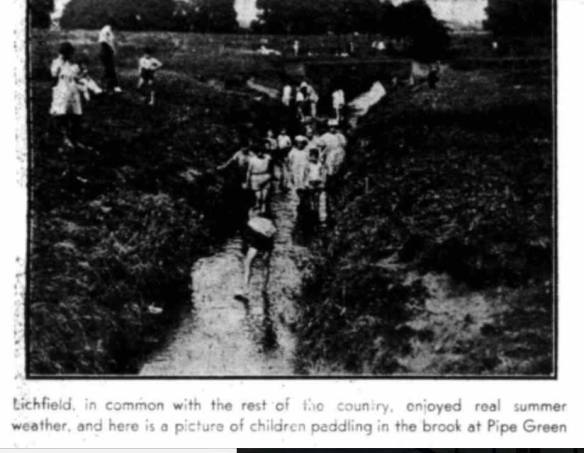 I’ve been paddling there with my kids (and without them!) but I’m seemingly in the minority, something I’ve always found strange given the close proximity of a primary school. With the exception of the occasional hot dog, the brook is usually as calm as the millpond it once flowed out of.

Those still waters run deep however. To the right of the pipe, you can see some of Lichfield’s many springs emerging from the sandstone aquifer far beneath the brook’s bed.

The pipe itself is currently the source of speculation between myself, the fantastic Jane Arnold of the Pipe Green Trust and others. Local historian J W Jackson talks of a pipe which ran from the well at Maple Hayes, which emptied its icy-cold water into the brook. He recalls how people would take bottles to be filled as the water was said to be highly beneficial for bathing eyes. Presumably this is the pipe he mentions but which well at Maple Hayes? Could he have been referring to Unetts Well, said to be the coldest water in Lichfield, where Sir John Floyer built a bath in 1701, later incorporated into Erasmus Darwin’s botanic garden?

I’ve always thought of natural history as having not much to do with local history but I’m beginning to see more and more how the former shapes the latter. Think its time to go and contemplate this a little more in the sunshine over a glass of water to which barley, hops and yeast has been added. It’s what Mr Worthington the brewer who once owned the Maple Hayes estate (which appears to have incorporated most of Leomansley at one point) would have wanted.