Remember at the start of the year there was a petition from some residents living in Bell End in the Black Country who wanted to change the name of their street because they said it was a bit rude and made those living there a laughing stock? Their limp attempt ended up with about 50 signatures whilst a counter petition, by a woman who found it far more offensive that a historic place name should be changed because of a a few, yes I’m going to say it, snowflakes*, ended up considerably larger with close to 5,000 supporting it.

A similar thing had happened here in Lichfield back in the 1930s and 40s. In December 1934, at the first meeting of the new Lichfield City Council year, the Town Clerk submitted a petition dated 22nd October 1934 signed by 23 residents of Hobshole Lane asking that the council rename it. At the first council meeting of the actual new year, on Wednesday 9th January 1935, it was agreed that it would be altered to ‘Valley Lane'”, and it has been known by this name ever since (officially at least).

Then, in October 1946, Mr Percy Laithwaite gave a talk to the Lichfield Women’s Institute on ‘The Why and Wherefore of Lichfield names’, and the Lichfield Mercury reported that many members had expressed regret that old names were being allowed to die out. The example cited was “the enchanting name of ‘Hobs Hole’ which means ‘Goblin’s Meadow’ being exchanged for the very ordinary one of ‘Valley Lane’ and it was decided to send a petition to the City Council asking it not to discard these ancient names which help give Lichfield its special character. It’s something I’m quite passionate about myself as place names tell stories and behind even the most seemingly prosaic ones, tales of sex, death and magical creatures lie waiting to be discovered. Look up Union Street in Wells if you don’t believe me.

Anyway, as Mr Laithwaite explained, the name Hobshole may have a folkloric origin. According to David Horovitz’s study on the place names of Staffordshire, similar place names in the vicinity (including Hobs Hall Lane at Aldridge) are made up of the Middle English ‘hob’ meaning ‘sprite, elf, hobgoblin’ and ‘hole’ referring to ‘a hollow, dingle or small valley’. It goes on to say that pits, holes and ancient earthworks were often associated with hob, sprites and goblins. I’m not sure whether this was because of an actual belief that a supernatural creature was in residence or whether stories of supernatural creatures were invented as a way of keeping curious children away from dangerous places. Perhaps a combination of the two?

What was it about having Hobshole as an address that residents objected to? The area seems to have been developed in the 1920s when council houses were built and I wonder whether it was something about people looking forward to the future and leaving the past and its unsophisticated ways behind? It wasn’t Hob’s hole anymore, it was their home. Perhaps the area had a reputation, for being haunted by hobgoblins or otherwise, that people were keen to disassociate themselves from?

About six months ago, I was having a conversation with someone who once lived on  Valley Lane in Lichfield and he told me the deeds to his house had had a map attached. A landscape feature called ‘Hob’s Hole’ was actually marked on this but I suspect whatever it was has long been lost. However, the past hasn’t been entirely discarded and I’m sure that the WI and Mr Laithwaite would be pleased to know that there is a Hob’s Lane off Valley Lane, even if it doesn’t quite tell the (w)hole story. 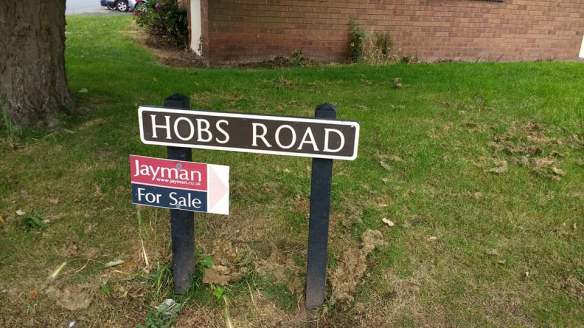 A Survey and Analysis and of the Place Names of Staffordshire by David Horovitz LL.B

2 thoughts on “A Hole Nother Story”