Last Saturday, our Lichfield Discovered group visited Sinai Park near Burton upon Trent, which has been described along the lines of, ‘the most important house in England to be in such a state’. One wing of the timber framed house has been restored beautifully by owner Kate Newton, using the skills of local craftspeople. The other two wings are still awaiting their salvation. You might expect it to have been fire which wreaked havoc here but in fact the rapid decline of Sinai was caused by water. 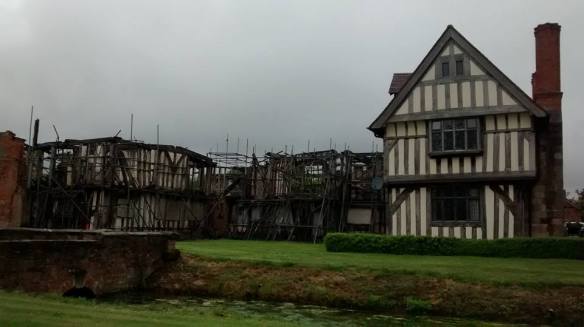 By the 1960s, Sinai had been converted to six cottages but, when the water supply was found to be contaminated, they were deemed unfit for human habitation. The owner, unsure what to do with this white elephant in the middle of his land, moved his pigs and chickens in. Anything that could be sold was – for example, wooden panelling went to the USA and the Tudor front door ended up at the Stanhope Arms in Bretby. I was just planning a visit in my head when Kate told us it had since been sold on again and she was still trying to track down its whereabouts to see if she could bring it home.

Painted original beams in the restored wing at Sinai

That perhaps explains the ‘in such a state’ element of the description, but what about the ‘most important house in England’ part?  The hilltop location with water supplied by a chalybeate spring, suggests the potential for much earlier occupation of the site. However, the first hard evidence we have of habitation here are the remains of a fortified manor house in the form of the thirteenth century moat surrounding the property and stonework in the cellars below. Sinai was donated to the monks of Burton Abbey by the Schobenhale family, and was used as a ‘seyney house’ i.e. a place to restore their strength after blood letting sessions and during periods of illness. Hence the name and its importance. According to English Heritage, ‘only a handful of similar monastic retreats or ‘Seyney Houses’ have been identified nationally’. That Sinai has surviving buildings dating to this period of its use  is described as ‘unique’.

The three wings are structurally independent of each other and it’s believed that the monks brought two medieval timber framed buildings here from Burton, and rebuilt them parallel to each other to use as dormitories. After the reformation, Sinai was given to the Paget family who at times used it as a hunting lodge. In 1606, they erected a medieval style great hall to link these two wings and to impress their mates.  Sinai remained in the family for around four hundred years until it was sold to pay off some of the debts run up by Henry Cyril Paget, 5th Marquess of Anglesey (and did he run up some debts!).

The property was bought in June 1918 by the Burton and District Co-Op Society and at the time the ‘Great Hall’, ‘Confessional’, ‘Solar’, and ‘Chaplain’s Room’ were apparently still in evidence. A photograph of the hall from ten years earlier can be found here on the Staffs Pasttrack site, and there’s one from the Victoria County History of Staffordshire, taken in the 1980s here, which shows just how much damage decades of neglect can do. 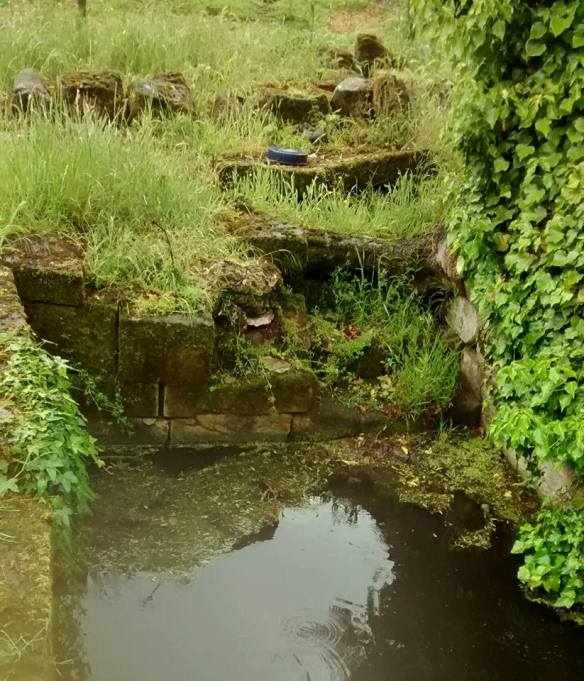 Back to the water, and in the grounds is a Georgian plunge pool, built over the chalybeate spring known as the Lord’s Well. There’s a great post about this on the Holy Wells and Sacred Springs site which you can read here. The Georgian bridge over the moat was built in 1732 and is thought to have replaced a timber bridge, where it’s said a skirmish between the Pagets and the Bagots of Blithfield took place during the Civil War, leaving musket balls lodged in some of the house’s beams. This leads nicely into some of the other stories and legends of Sinai. For anyone who isn’t interested in this part, please tut and move on to the next paragraph. For those who are, a tunnel is said to lead from the cellars here to Burton Abbey and there are around fifty ghost stories, some of which you can read about here.

On behalf of Lichfield Discovered, I’m really grateful to Kate for her hospitality and for sharing all of the stories of Sinai with us and wish her all the best with the restoration project. Let’s hope that one day it will be known simply as ‘one of the most important houses in England’, without the ‘in such a state’ epithet. To keep up to date on developments at Sinai Park and to arrange visits, please visit the Sinai Park House website.

The restoration of the north east wing at Sinai was completed in 2000.