I first heard of the crypt beneath St Editha’s in Tamworth town centre a couple of years back when Mark from Tamworth Time Hikes visited and wrote about the place (see here). A recent article in the Tamworth Herald reminded me of its existence and so with an hour or so to kill in the town before an appointment, I went to take a look for myself. 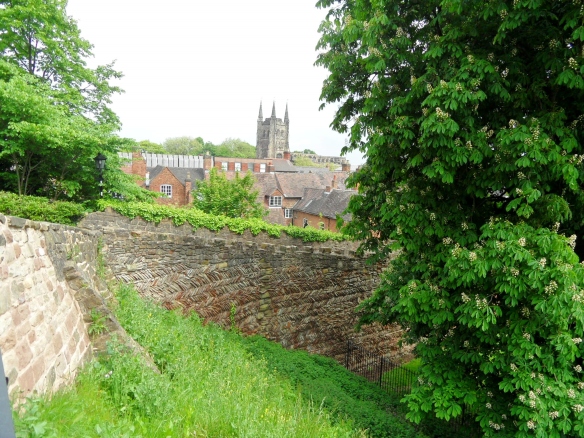 Exisiting stonework shows that the church dates back to at least 1080 but it’s thought the Normans may have built on the site of an existing Saxon church. It’s a wonderful mixture of architectural styles, with some beautiful stained glass and monuments to the great and good (and probably not so good) of Tamworth, plus a rare double spiral staircase in the tower. However, with only limited time, all of these wonders would have to wait for another day as I wanted to focus on the crypt.

In the 1860s, the entrance was apparently down through a trap door and along a narrow passage. These days the crypt is reached via a flight of steps, making it far more accessible, but perhaps a little less atmospheric, especially as what looks like a Mothercare stairgate has been installed to prevent people tumbling to their doom.  Rightly or wrongly, I’m not the sort of woman who goes around opening stairgates without first seeking permission and so I went over to the bookshop to ask.  Here, I got a little distracted from the task in hand and ended up buying a book on ‘The Castles and Moated Mansions of Staffordshire’ (within which I’m sure lie the beginnings of many future wanderings) but soon got back on track and asked about going down into the crypt. Luckily for me, the church guide was sat in a nearby pew reading a newspaper and he offered to take me down there and tell me all about its history. 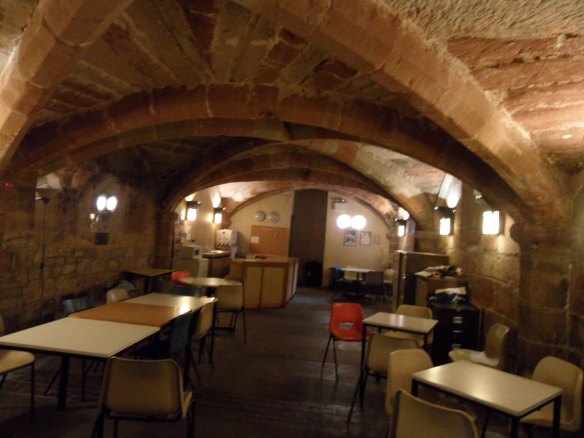 One theory is that seven hundred years ago the crypt was part of a stand alone chapel, that may even have been Saxon in origin. At some point in the fourteenth century it was incorporated into the main church. During the reign of Elizabeth I, it started to be used as a charnel house to accommodate the old bones that were disturbed when new graves were being dug in the churchyard. This remained its purpose until 1869, when the crypt was needed to house a boiler and the bones were returned to the churchyard, reburied in the north east corner. I nearly fell off my plastic chair when we were told that there was a plague pit beneath our feet and coffin lids in the roof above our heads, including one thought to have belonged to a crusader and on which faint carvings can still be seen.

I’m assuming the coffins themselves were destroyed during the Victorian renovations, although one does survive in the main body of the church, near the entrance to the Comberford chapel. 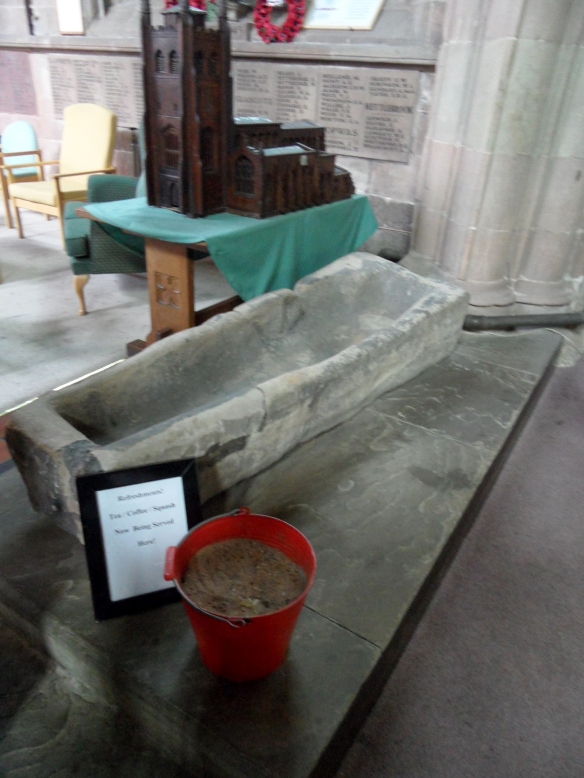 When Mark wrote about the crypt he included this brilliant drawing of it from a Victorian account of Tamworth by Charles Ferrers Raymund Palmer. According to Ferrers, when he entered the crypt, the bones were stacked up in very regular order and occupied the whole of the east end, where local folklore had it that a passageway ran from here to the Castle. In trying to find this passageway, Ferrers says he made a path through the bones by ‘carefully piling them aside’ but found ‘nothing there, except the remains of the ancient altar; the stone slab of which is gone’. He was unable to examine the floor at the base of the altar as there was nowhere to store the bones, which were ‘so rotten, that they crumbled to pieces beneath our feet’ as ‘in spite of all our efforts, they returned to our feet, and their dull clatter seemed a reproach to us, for disturbing their long and quiet repose in the sacred place’.

Ferrers is clearly made out of sterner stuff than me. Stood in near darkness with the bones of ancient Tamworthians rolling around his feet he even stayed down the crypt long enough to examine an ancient Latin inscription on the wall. Still visible today, the verse is thought to date back to the fourteenth century and is now protected by glass. Apparently it translates as: 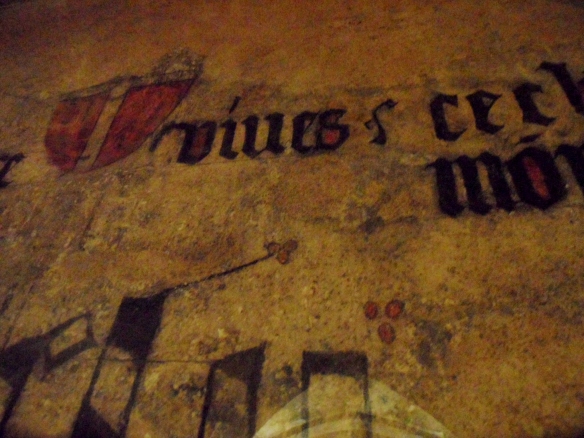 All the guide wanted in return for his time and knowledge, was a comment in the visitor book. So, if you ever go, and I really hope you do because it’s such an incredible place, don’t forget to sign it on the way out (you may notice a comment from a very enthusiastic and delighted Kate Gomez of Lichfield…)