Pat (who knows so much about Lichfield, that I think he should start his own blog!) was on holiday in Wales when he spotted a book about Lichfield’s very own Police Mutual Assurance Society (PMAS). The history of the friendly society was written by Peter N Walker, whose ‘Constable’ books published under the pen name Nicholas Rhea were made into the Heartbeat series. Pat very generously bought the book in the hope that it would be of interest, which it certainly has been.

PMAS, founded in 1866 is one of Lichfield’s biggest employers. The HQ, was built on former gasworks on Queen St by the Linford group, which up until its collapse in October this year was also one of Lichfield’s largest employers. Work started on the site in 1969, after the society outgrew its premises in Greenfield Crescent, Edgbaston, Birmingham where it had been since 1954.

The original part of the building was opened in 1970.

The orginal part of the building was opened in March 1970 by Princess Alexandra.  According to the Mercury, not many people knew that the building was to be called ‘Alexandra House’ until the princess arrived. Possibly today, not many people know why it’s called ‘Alexandra House’. However, on that cold spring day in Lichfield, there was much excitement about the Royal Visit from Princess Happiness as the Lichfield Mercury  christened her (which to be fair is catchier than her full title Her Royal Highness Princess Alexandra Helen Elizabeth Olga Christabel, The Honourable Lady Ogilvy, Royal Lady of the Most Noble Order of the Garter, Dame Grand Cross of the Royal Victorian Order). There was a band from the Junior Soldiers Company of Whittington Barracks, a marquee erected behind the new building and 2,000 cheering school children (who would be round about 50 now? Wonder if anyone remembers it?).

The building won praise from Lichfield Civic Society who crowned it ‘Best New Building’ 1972 saying the bold design had produced a building which invited entry and which looks as if something is happening inside. I think that’s interesting because I think that this kind of architecture is the kind most people would turn their noses up at today…. 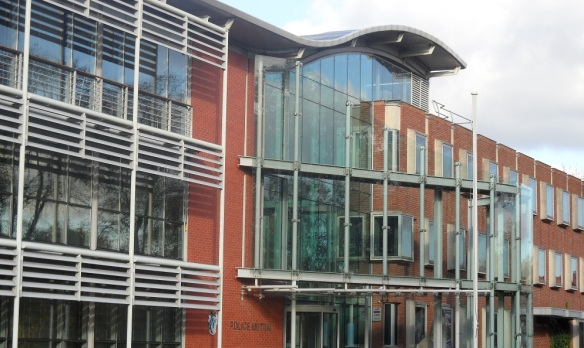 The PMAS HQ was extended in 1990 and again in 2000.  In 1990, originals from the Ladybird book ‘The Policeman’ were acquired and hung in the boardroom.

Mr Fabricant, MP for Lichfield,  once said in an interview with the Mercury, “I believe one of the most interesting modern buildings in the region is the Police Mutual building in Queen Street in Lichfield. Its modern extension is elegant and blends in well with its surroundings”.   I have to agree.  What will people think of it in years to come though?

So following on from this I’ve had a few rambling thoughts for another day….
I’m not ready to explore this just yet but at some point, I really would like to consider this idea of ‘future heritage’ and how opinions will shift on what is and what isn’t valuable & attractive.  Also, even if it isn’t ancient, pretty, haunted or associated with a famous inhabitant, I do think the history of anywhere people come together, like a workplace, is really important. Another interesting idea to explore is the impact of a workplace on a community? For example, when PMAS moved to Lichfield in 1954, many people apparently sold up in Brum & moved nearer to the new HQ. Also, how has the closure of Linford affected the city? I saw on twitter the other day that Wolverhampton Archives currently have an interesting project about local businesses in that area called ‘Taking Account of our Past’, which is definitely worth a look.

As ever, if any one has any thoughts, questions or comments on any of the above, I’d love to hear them 🙂 I do have a little bit more to add on PMAS HQ in relation to the stones at the entrance, which always remind me of the sea…..